Exercising doesn’t have to be boring. Don’t just put one foot in front of the other; join a running group that does more than just exercise. With hundreds of running groups, find one that is tailored to your interests! 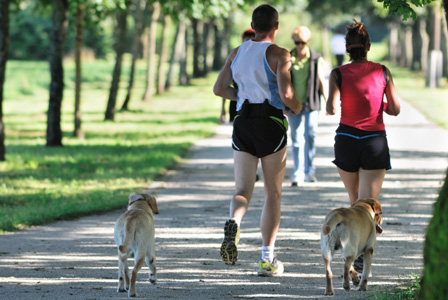 For the brew lover

Beer running clubs can be found nationwide. They call themselves “a drinking group with a running problem.” Pretty much sums up all of their runs. The runs usually consist of a 3-5 mile run all ending with a tasty treat and beer from a local favorite brewery. Runs take place all over, including: Chicago; Milwaukee; Denver; Spokane and Tacoma, Washington; Missoula, Montana; Philadelphia; Cambridge, Massachusetts; and Raleigh, North Carolina — just to name a few!

Food and running go hand in hand. With the motto “We run to have fun, mimosas and French toast,” who wouldn’t want to run with a tasty meal waiting for you at the end? Each week, the running club hosts a 5k and 10k run to help promote healthy lifestyles. This run club is hosted in two cities, Denver and Phoenix.

For pets in need of exercise

This runners club allows you to help out the local animal shelter by running dogs that are normally caged up for most of the day. The interaction helps the animals all get exercise on a daily basis on a trail behind the shelter. Right now the club is only in Austin, Texas, but there is talk that they would like to open at numerous shelters nationwide.

For the yin and yang lovers

This group combines heart, mind, soul and feet. Every week the group meets up for a 30-minute run, followed by a 30-minute yoga session. Yoga helps runners stretch to keep from tightening up and cramping. This free group is in Minneapolis.

For the adrenaline junkies

This mountain running club is not for the easily winded, but if you are tired of running the same long course every day, try trail running with this group. They run miles and miles through the mountains of Utah, with no pavement in sight. There are more running groups like this one all over the nation. Other popular trail running groups are Coyote Running in Los Angeles, Trailhead Running in Austin, Texas, and Dirty Girls Trail Runners in Gig Harbor, Washington.

For your furry friends

This running club bonds dog and owner. With more than 1,200 animals and their owners, the weekly runs are fun-filled for humans and animals alike. There are a variety of trails that are offered, from beginners to trail running experts. Retreat from the city life and bask in the nature around you. This club features two trail runs, the Middlesex Fells Reservation and the Blue Hills Reservation, both in Massachusetts.