When my ex told me after 20 years of marriage that there was someone else, all I heard about was how he wasn’t happy and that his affair (and the dismemberment of my family) was all about his personal happiness. Now that his mistress is a drunk, I have to ask: How happy is he now? 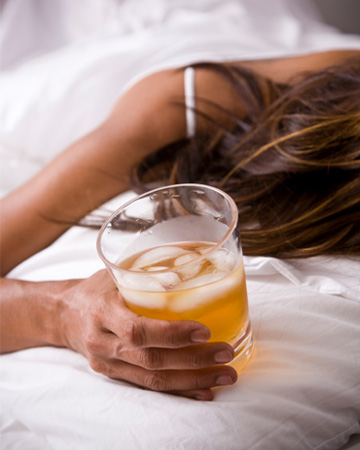 I assume many readers think that I celebrate in knowing that the woman who helped plant my marriage six feet under has become a functioning alcoholic. I don’t. Sure, I’d love to snicker at her and say, “You’re an alcoholic after four years of being with him? Four years? I can do four years in my sleep. Amateur.” But I won’t. In the first place alcoholism isn’t funny. More than that, this whole affair and subsequent ripping apart of my family were supposed to be about his happiness and a better life.

What was it all for?

When your spouse of 20 years trades you out for someone else, you want to make it about something you can wrap your head around. The other woman should be more attractive, sexier, funnier, smarter and harder working. In my case, none of those things are true. If my ex had upgraded in some way, or he found his “soul mate” I would have been just as devastated, but with time I think I could look at the situation and think, “I get it,” or “that makes sense.” I’ve never had that to fall back on.

Now I learn that my ex’s mistress is a pass-out-in-the-middle-of-the-floor drunk. She starts about two in the afternoon with stiff vodka drinks and pounds whiskey at night until she passes out. Through the grapevine, I have heard she is unresponsive in the evening (so there goes any suggestion that his sex life is better now).

My ex was vilified in our divorce, as he should have been, because the kids and I deserved far more than we got. His affair was an embarrassment to his friends and family, many of whom are still scratching their heads in response.

So what was it all for? If my ex had to go through the humiliation and expense of our divorce, shouldn’t it be for a better life? He’s an attractive guy, in his early 40s and he makes sick amounts of cash. Shouldn’t he date 20-somethings for a year or two, just because he can? Shouldn’t he capitalize on what’s left of his youth and live it up a bit? Why, for the love of all that is good and holy, would he settle for anything less than his “happiness?”

Who knows what makes my ex tick. The guy never really knew how to be happy, so maybe this is just another example of that. Maybe he’s out to prove a point — that he didn’t destroy his family for nothing.

It’s none of my business, but I do hope this serves as a cautionary tale for anyone who is considering cheating as a means of creating happiness. Think about it. Within your own circle, how many cheaters end up better off in their new relationship? Of the six couples in my immediate circle that I could think of who cheated, one of the six was better off (he later died). And by one, I mean him and his girlfriend — certainly not his ex-wife or his kids. Isn’t anyone watching Investigation Discovery? Ninety percent of those crimes are a result of infidelity!

I’ll wrap this up with one simple question. Doesn’t it stand to reason that if you meet someone during a dark time in your life — when you’re confused and making poor decisions — that it may not be the most fertile ground for a healthy relationship?

Holidays with your new guy don’t have to be awkward
Text messages: Hidden clues about his personality
Why we need drama in our relationships

15 hrs ago
by Monica Beyer