L.A.-based studio Aura Yoga is incorporating a new technique into their flow classes: light technology. See how different colors can affect your practice. 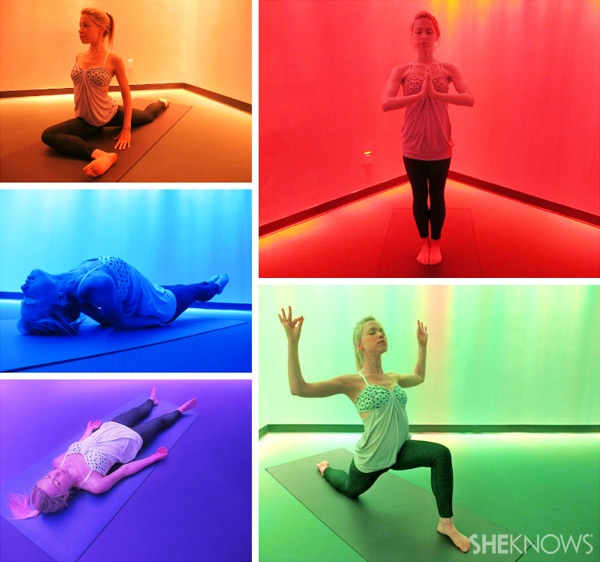 We all know by now that yoga isn’t simply a room full of hippies sitting cross-legged, holding hands and chanting “Ommm.”

Since yoga became mainstream in the 1960s, studios all across the country have popped up, featuring their own interesting takes on the technique: power yoga, hot yoga, water yoga, yoga with weights, yoga to hip-hop beats and even surfboard yoga.

Now, the Los Angeles-based studio Aura Yoga has one more twist to add to the list: light-enhanced yoga.

No, that doesn’t just mean they dim the lights during savasana. Aura has created an intricate system of custom colored lights to coincide with the flow of the class.

“The lights and the color are used to create a better experience for the class,” Aura’s head yogi Jake Ferree tells SheKnows. “A lot of the classes are based off themes or chakras. Each chakra has a color that is attached to it. So we use the colors of the chakra to increase the experience of the class.”

If it sounds like a bunch of mumbo jumbo to you, you’re not alone. People have been pushing the concept of “color therapy” for years, with no scientific evidence to prove it works. But Aura isn’t calling their technique a “therapy.” It’s simply a cool, new approach to enhance your practice. Your own imagination will be what determines the efficacy.

“It opens up your senses visually,” says Jake. “It helps set a mood so you can play with your imagination when you’re in class and really be able to disconnect from the outside world. It helps you be more present in the practice.”

So how does it work? We gave it a whirl to find out. 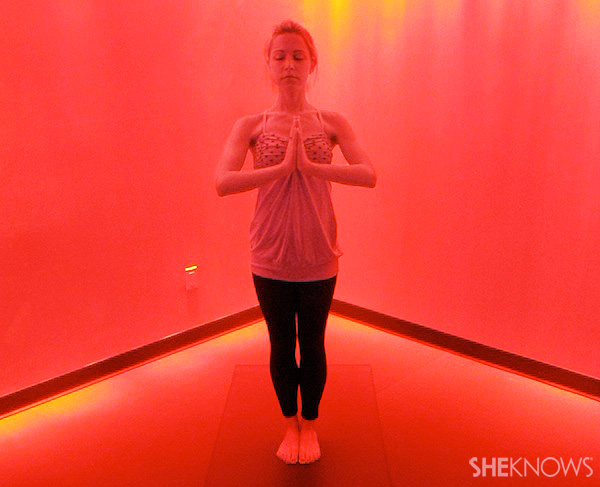 The first chakra is at the base of the spine and it’s about being grounded. The pose we did, called tadasana or mountain pose, is a grounding pose. We’d usually begin the practice with this. 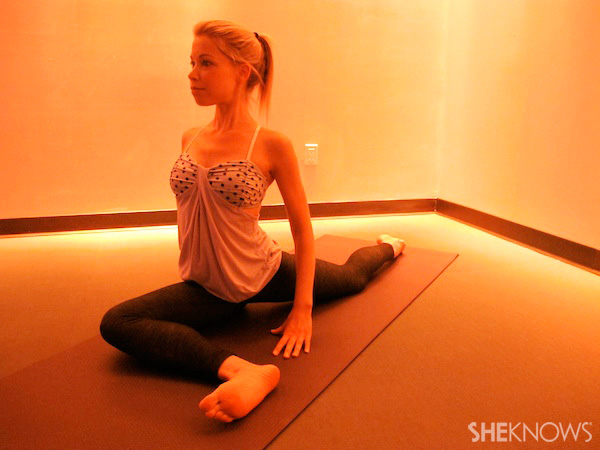 The second chakra has to do with the sacrum. That’s where we hold a lot of our emotions. Anything that uses the hips or opening up the hips is dealing with this chakra. When we’re in a pose that opens you up like this, it stirs the pot a little. Emotions will pop up, whether they’re frustration, annoyance, sadness or maybe happiness. Some people end up laughing, although I don’t hear that very often! 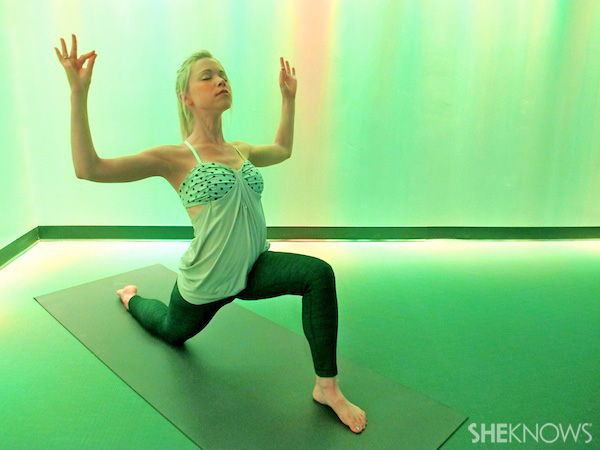 The fourth chakra is the heart chakra. We did a modified crescent pose with the elbows bent to open up the chest. Any pose that opens up the chest fits into this category. Chest openers are considered energy-boosting poses. 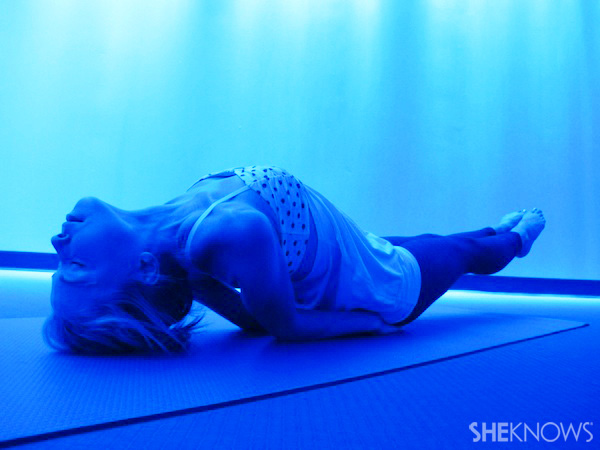 The fifth chakra is the throat. It’s where we have our voice, and who we are. It’s our self-expression. We did fish pose, which is a very vulnerable pose. If you have an area of your life where you feel like you’re not expressing yourself, these poses can be very challenging for you because you’re confronting that expression. Finding that length and opening up that region is going to help open you up, even if it feels uncomfortable. 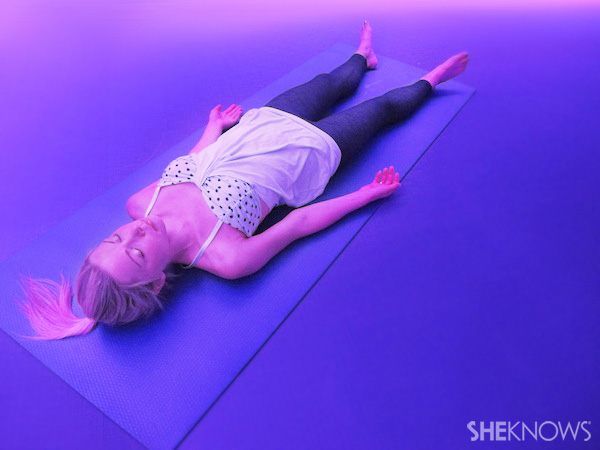 The sixth chakra is the third eye, the place between your eyebrows. It’s a place of imagination and enlightenment, that inner guru that already has all the answers. Savasana, or corpse pose, takes you into that place of openness and reminds you that all those answers are within you.

There are two other chakras that we did not address in this routine: the third chakra, yellow, which is your solar plexus, and the seventh chakra, violet, which is at the crown of the head. “The third chakra is all about self-esteem, self-confidence and will-power,” says Jake. “Every pose can be connected to this in a way if you set that intention and focus on the power within the pose to stay within the pose. The last chakra is the crown of the head. It’s full enlightenment. The more practice you have, the more you can channel this.”

For more info about Aura Yoga, visit their website.