It’s not uncommon for women to end up dating and eventually marrying a man who is similar in personality to their fathers. But why is that? We have the scoop on why and where that relationship theory stems from. 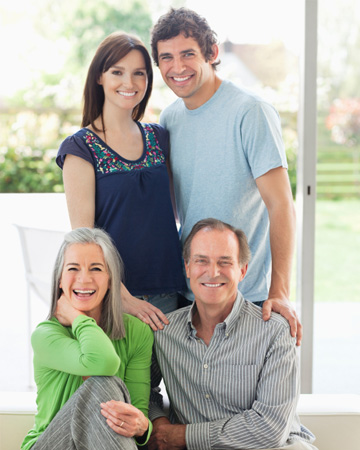 We caught up with lifestyle and relationship expert Laurel House to get her take on whether women really gravitate toward men who are like their fathers.

Setting a standard for love

You’ve likely heard the theory before that women end up marrying men who are like their fathers. But is it true? Yes and no, but there is weight to the idea and some reasons it can be true in some cases. How you were treated by your father as you were growing up helps shape your view of men in general and what you expect from them. It sets a standard, explains House. “It isn’t that a woman is necessarily choosing to date a man like their father, but instead she has learned to love that kind of man, because that was the first feeling of love that she has ever had for a man. It is a standard that is set.”

Women and their fathers

If you were raised by a very caring dad who looked after you, took care of you and treated you like his little princess, you might now look for similar treatment from who you date. “These affectionate and caring qualities carry over when you’re evaluating a perfect mate,” she says. “Is he going to treat me the way I’m accustomed to? Am I respected and cared for? It can set very high expectations and make it hard for women to find a ‘perfect’ mate because no one is as great as their dad.”

Simultaneously, House explains that if your dad was more cold and distant, worked a lot and was always too busy, that is also setting a standard — a standard that could influence who you date. You might also make a point of steering clear of those qualities you might not have liked in your father, but the fact remains, those qualities did or do influence you.

The gray area and pros and cons

Women often date men that have elements of their fathers, regardless of whether their dad was amazing or not so great. But that doesn’t mean you’ll end up marrying a man similar to the man that raised you. “That conditioning, to love a man that is like your dad, if you love a man with characteristics that are unhealthy, can change when the right guy who is patient and helps you be comfortable loving someone who loves you differently than you are accustomed to feeling love,” House explains. So just because you’ve dated guys like your dad in the past, meeting the right person, regardless of whether he shares qualities with your dad, can shift your perspective on the type of person that’s best for you.

The pro to marrying a man like your father, says House, is that you already understand the type of person your husband is. However, this could backfire. “A lot of men cannot live up to the expectations that a woman puts on them and so there can be issues that come up in the relationship,” she explains.

House says that sometimes in the beginning a woman can be attracted to someone like their father faster than someone who is not. However, she is a firm believer that opposites attract too, so in the end it’s difficult to predict if most women really end up with men like their fathers. We know they date them, but whether they end up marrying them isn’t as easy to ascertain.

More about love and dating

Dating dilemma: The good on paper guy
5 Secrets to keeping the man you love
12 Things you didn’t know about men

12 hrs ago
by Carolyn De Lorenzo