The holidays are a magical, blissful time of year. For these readers, they’re even more special because it’s when they got engaged to the love of their life! 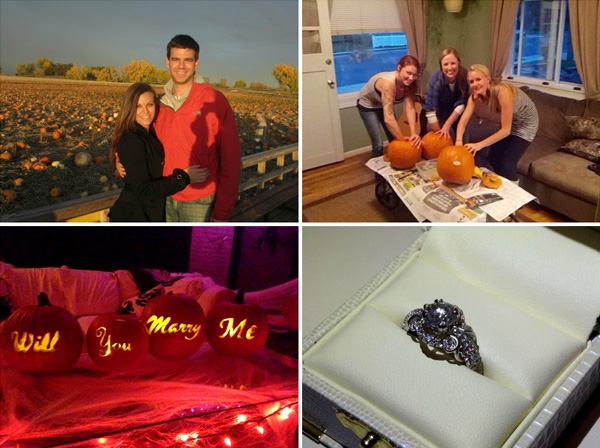 I’m a huge fan of Halloween (my absolute favorite holiday) and everything that comes with it, so my now fiancé recruited my best friends to help him transform our new house into a romantic haunted house-like setting. They carved seven different pumpkins to say ”

During December of 2011, I flew down to Orange County with my wife to spend the holidays with her family. After secretly picking up the ring from the family friend, I waited until dusk and suggested we drive to the Montage Hotel for a walk on the beach. The Montage was beautifully decorated with holiday lights and created the perfect romantic atmosphere for a proposal. Holding hands, we slowly made our way to the water where we removed our shoes to walk across the beach with the sand in our toes. I was short of breath and very nervous about exactly when and where along the beach I would propose. I finally decided on just the right spot where I dropped to one knee in the sand, took my wife’s hand in mine and asked if she’d make me the luckiest man alive. Thankfully she said yes, and we made our way back up to the hotel for a celebratory glass of Champagne before heading home to announce the good news to her family. – Brian

My husband proposed to me on Dec. 8, 2011, during the holiday season. We were both living in
Austin, Texas, at the time and he had to move back to Dallas about a week earlier. I was so sad! Well, he surprised me by coming back into town for the weekend and invited me to a comedy show where we went on our first date. There are a lot of really fun stories from that night, including an older couple who got engaged during a slide show presentation before the show started. At first, Derek was worried they were going to steal his thunder, but he decided his idea was better.

He arranged beforehand to have the people who ran the show call him up during the show. He told me he was going to try his hand at live comedy (something he’d always been interested in.) Well, once he got up there he called me to the stage, saying we were going to sing a duet together. I still had no idea! I joined him on stage, and that was where he proposed to me. Afterward we went to a great Italian restaurant, where he gave me a bouquet of roses (one for every week we’d been together) and explained the symbolic significance behind the pearl ring he gave me. – Stephanie 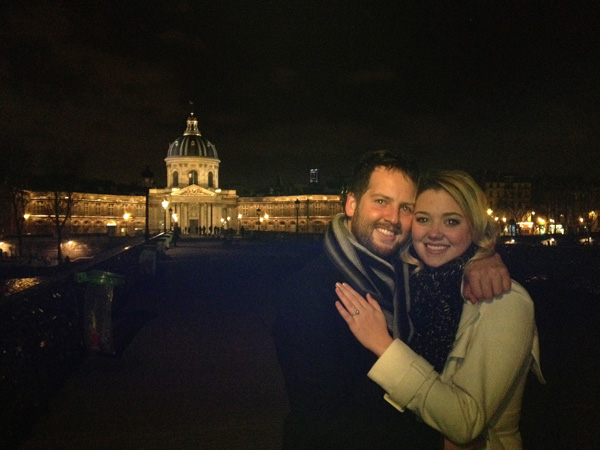 My fiancé and I took a trip to Paris last year during the holidays. We left the day after Christmas and landed in Paris on the morning of Dec. 27. That evening, we had a delicious dinner right next to the famous Louvre museum. We decided to go for a walk after dinner to explore Paris at night. I was dying to see the Eiffel Tower, so Tyler said he would take me there. I noticed we were going the opposite way of the Eiffel Tower, but Tyler claimed the concierge told him of a shortcut. So we walked along the river and suddenly he exclaimed, “We have to cross this bridge!” We start walking on the bridge and he says, “Look at all the locks!” I suddenly remembered reading about this famous bridge covered in locks that have been affixed by lovers to symbolize their love for one another. I looked at the locks and said, “OH! I remember hearing about this!” As I turned my sights back on Tyler, there he was, down on one knee. All I remember next was Tyler saying, “I’ve loved you since the first day I met you” … The rest is a blur. He slipped the ring on my finger. People crossing the bridge cheered and clapped as we kissed and hugged. It was a fairy tale moment. We spent the rest of the evening walking through Paris stopping at each little cafe we crossed for a celebratory glass of Champagne. I might also add that neither of us had an international cell phone plan, so even if we wanted to, we couldn’t call anyone to tell them the news. It was insanely romantic to spend the following few hours strolling through Paris as a newly engaged couple while no one else in the world knew about it. – Jenna

This guy proposed to his girlfriend with a painting!
“Man-gagement” rings: The latest wedding trend?
Pros and cons of a long engagement