Carlos and Corie’s marriage was on the rocks in 2009, but a separation allowed them to repair the damage and their relationship. Find out how Carlos and Corie used this painful time in their marriage to restore a thriving and happy home. 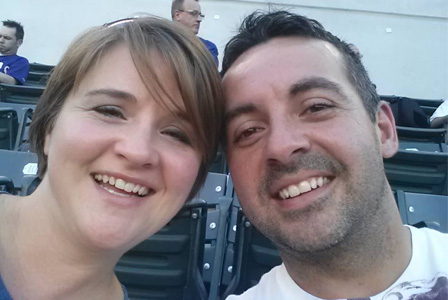 Corie Andrade is a woman with a quick laugh and a giving spirit. She has been through a lot in her life — and she currently juggles multiple responsibilities with beautiful grace. Corie is a doting mother to her five children, ages 21 down to 6, and she manages to work part-time while also home schooling her kids who are still at home. She generously shared her story of separation from her husband with us, because in typical Corie fashion, she said, “If what we went through can be used to help anyone, I’m up for it!”

A budding romance and early life together

Corie and Carlos went through a whirlwind romance and quickly moved in together. “Carlos and I met in Chicago in 1995. He immediately struck me as the most laid-back person I’d ever met, which was very attractive to me. I was drawn to his caring personality and the way he made me feel safe and cared for.”

But some of their immediate attraction was tempered by the realities of life. After a few months of dating, they started fighting a lot about their different priorities. Carlos wanted to play volleyball and hang out with friends, and Corie wanted him home to spend time with her and her 3-year-old son. They remained in love and committed to working on the relationship, but life was complicated when Corie found out she was pregnant. They decided to get married, but according to Corie, they never mended some of their early disagreements.

“The first few years of marriage were hard,” Corie said. “We fought a lot. Carlos went from being single and doing whatever he wanted to being married with two kids in a matter of months. There were unmet expectations on both sides, but we pretty much ignored it. We would fight, make up and pretend it didn’t happen. I would stuff my feelings and he would drink.”

Even though Corie and Carlos had ongoing problems during their early years of marriage, they experienced a series of unfortunate events that brought their unhappiness to the surface. In 2008, they went through a job loss, vehicle repossession and foreclosure that forced Corie to return to work full-time for the first time since their children were born. “At first, I think I resented Carlos. But then I started to experience praise at work, and people paid attention to me. I would then go home and Carlos would watch television or play video games, which made me realize how lonely I was in the marriage.”

The combination of financial woes, returning to work and realizing her loneliness set off a chain reaction that led to the separation of Corie and Carlos’ marriage. “I reconnected with an ex on Facebook,” Corie said. “It was inappropriate, and I wasn’t at all surprised that Carlos was extremely angry when he found out. In the arguments that followed, it became clear to me that we needed help. I begged him to go to counseling, but he refused. I didn’t know what else to do.”

Finally, things got so bad in the home that Corie felt that she had to use an ultimatum to make Carlos see how badly they needed outside help. “I told him he had a week to make an appointment with a counselor. I guess he didn’t like the ultimatum, so he never made an appointment. Some of my dear friends helped me pack our things, and the kids and I left to stay elsewhere. I didn’t tell Carlos we were leaving or where we were going.”

Corie wasn’t at all sure what would happen to the marriage once she created a separation. She was scared, but felt at peace with the decision. “I always believed divorce wasn’t an option, but I knew that drastic measures had to be taken. I believed that the separation would allow us to process our emotions without the pressure of the other party’s presence. I needed the time to sort out my feelings and priorities, and I was praying that Carlos would do the same.”

“During our separation, Carlos’ best friend was getting married. He was the best man and one of our daughters was the flower girl. Carlos and I had barely spoken and I had to spend all evening with him at the wedding and reception. Carlos came straight to me after the ceremony was over, and told me he would do whatever he needed to do for me to come home. He said that standing there and hearing those vows all over again reminded him of the promises he had made to me and God.” Within a day, Carlos made an appointment with a counselor, and both he and Corie worked together on rebuilding their marriage.

“It was a long road,” Corie said, “but we have a great marriage now. We enjoy each other now. It’s important to him that we spend time together, and I didn’t feel that before. There is no doubt in my mind that he adores me, and that makes me feel like the luckiest girl in the world. Not only that, our children have a greater sense of security and happiness.”

23 hrs ago
by Charyn Pfeuffer