Of course you’re going to get on each other’s nerves from time to time — it’s only natural. But what if the very quirks that attracted you to each other are now coming back to bite you (I’m sure you can guess where)? Here’s how to weather the storm — you know, minus the whole sleeping-in-separate-rooms thing. 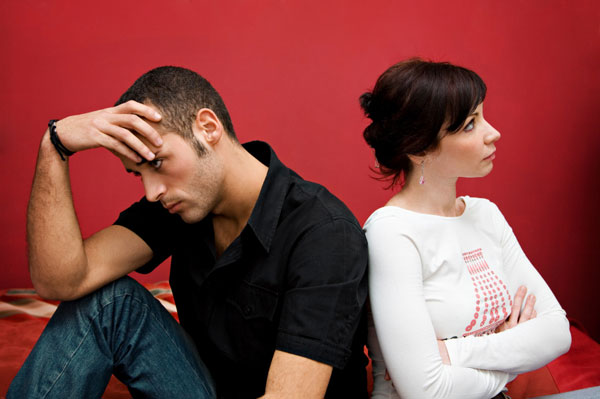 I will admit, I did enjoy the differences between myself and my (now ex) boyfriend… until I didn’t. They added a lot of mystery and variety to the relationship at first, but unfortunately didn’t turn us into a well-rounded couple like it does for some. Instead, they activated a year-long tug-of-war where we used our differences against each other until the relationship finally broke.

The little things got to us because we never talked about the big things. Had I known completely who I was and what I wanted before we hooked up, it’s not likely we ever would’ve ended up together. “There are deal breakers, and there are differences, and while the former can be fatal, the latter can bring wonderful opportunities,” says relationship expert and author April Masini.

While you’ll never run out of things to talk about, heated discussions can quickly turn into bickering matches. Luckily, you can use them to your advantage. Clashing in the short term means you’re less likely to have huge blowouts later. By not suppressing how you feel and allowing each other to have a say, you can accept the play-by-play of your differences as they happen (which also means saying sayonara to future resentment).

“When you’re good at different things, you don’t feel the need to compete,” says Masini. If either of you (or both) are competitive, you might find yourselves constantly trying to one-up each other and never really being happy for each other’s successes.

He’ll never fulfill all of your needs just like you’ll never fulfill all of his, which is why it’s uber-important to have your own social lives outside of the relationship. If he accepts the fact that you’ll never be into UFC and you accept his stance on rom-coms, you can both turn to your friends for emotional fulfillment (not to mention a good time), and will be less likely to take your differences out on each other.

Imagine if you both saw sex the same way? Womp, womp. “If one of you is a missionary position fanatic simply because it works and the other thinks outside the box, there’s a lot of fun to be had in the bedroom,” says Masini.

More opportunities to succeed together

If you pool your differences together, you’d be surprised at what you can accomplish. For example, if you suck at math but are a whiz at finding good deals, he can take care of your budget while you take care of what to do with it. “The fact that he has strengths that you don’t allows your partnership to make the whole greater than the sum of the parts,” says Dr. Emma Seppala, Associate Director for Compassion and Altruism Research and Education at Stanford University.

“Every ‘fault’ usually has a flip side that’s ‘good,'” says Seppala. “For example, someone who may appear overly regimented and Type A can also be trusted to be on time and dependable,” just like someone who’s considered lazy is also known as calm and peaceful. By looking at the good and the bad, it’ll be easier to accept your differences, and ultimately become less triggered by them.

Power struggles: Why being right can make everything wrong
Relationship advice from successful couples
The secret to a healthy relationship: Be selfish