Lisa McComsey, co-author of The Vegan Cheat Sheet, busts a few myths about plant-based eating and shares some benefits of the diet. 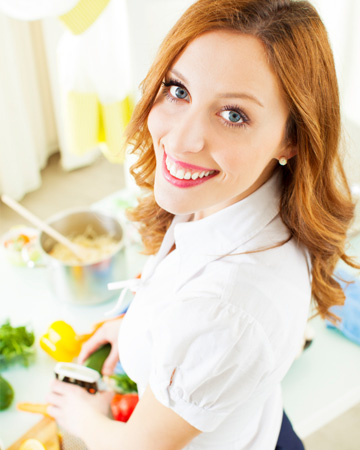 Even the best attempts to raise awareness about veganism tend to fall short. Many of us picture vegan eaters as waifs or tree-hugging hippies. As a result, many people have myths about veganism — and the kinds of people that turn to this healthful diet.

The vegan diet is free of animal products, so no meats or cheeses. Several celebrities have applauded it such as Alicia Silverstone, Natalie Portman, Russell Simmons and Kristen Bell.

Lisa McComsey, co-author of The Vegan Cheat Sheet, helped us break through all the confusion. In sharing myths about vegan eating, McComsey points out the truth about veganism — and the benefits of this diet. Think it’s boring? Think again!

True or false: Protein sources only come from meat. False, McComsey says. Vegan diet staples such as fruits, grains, beans, legumes and nuts are packed with vitamins, minerals, fiber and protein. There are plenty of vegetables that are protein sources and do not contain heart-clogging saturated fat and cholesterol found in animal products, she says.

Myth: The vegan diet is too boring

Think it’s all about lettuce and tofu? That’s not true, either. Vegan eating is exciting and adventuresome, filled with wonderful textures, flavors and aromas, McComsey says. Spices like curry and saffron add a punch of flavor to many of the dishes she enjoys, while grains including quinoa, amaranth and teff add texture to meals. What about your old favorites such as lasagna and pancakes? Still on the menu.

“When you consume healthy stuff, you rarely have to measure portions or count calories. It’s liberating!” McComsey says, noting that you can’t go overboard on other vegan items (pass the chips) that can pack on the pounds — you still have to be mindful of what you eat.

Myth: Vegan eating is too expensive

McComsey says that eating vegan foods probably won’t cost you more than what you spend on the foods you eat now. In fact, meat can be quite expensive. By stocking up on produce, beans, grains and nuts, you can create an affordable diet. Once you work with your shopping list and stock your kitchen, you’ll find it’s not only affordable, but convenient, too. With your healthy new eating habits, you’re likely to save a bundle on medical bills, too, she says.

Not anymore, as many mainstream stores carry a variety of vegan foods. The Internet can also be a gold mine for vegan products. Grains are easy to find in the stores now that the media has discovered their benefits, and you can always pay a visit to bobsredmilll.com and pleasanthillgrain.com.

Okay, the whole Alicia Silverstone chewing food and putting it into her child’s mouth thing was a little crazy, but the girl is on to something with her vegan diet. The old stereotype that vegans are militant, Birkenstock-wearing hippies wearing “Meat Is Murder” T-shirts is not always the case. Many vegans are your average everyday people.

Powered by plants, vegans are often athletic, fit and strong, McComsey says. The goal is not to be skinny but to be healthy, energized and active, she adds.

McComsey, a vegan based in New Jersey, practices what she preaches — though she admits that she still has cheese cravings. She understands that many people think they will never be able to sustain eating without animal products in their diet. That “overwhelming” feeling is why she penned the book along with co-author Amy Cramer.

“When people hear that meat, dairy and eggs are off-limits, they immediately think ‘deprivation’ — whether they’ll be deprived of all the foods they know and love, and/or their bodies will be deprived of nutrients. It’s simply a matter of being mis- or underinformed — and probably [also stems from] fear,” she says.

“I was scared to death prior to embarking on my one-month experiment; I thought I would starve,” McComsey said. “When I give talks about my vegan transformation, most people are shocked to learn about all the wonderful things they can eat.”