You know the one: He’s good looking, funny, thoughtful… but the second you show any hint of being interested, bam! He goes nuts. 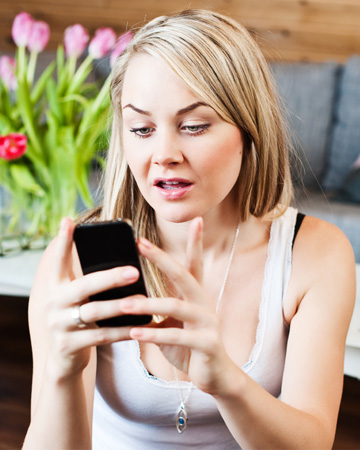 Here’s how to assess the situation and figure out if he’s really being clingy or if you’re just a closeted commitment-phobe.

I went through this phase in my early 20s where all I seemed to attract were clingy guys. I worked retail at the time, and they’d pull out all the stops: They’d come in as often as possible to buy things (you know, without being too obvious), lay on the compliments, bring me coffee, talk about what they could do to make my life better/easier/barfier, and of course, ask me out. All. The. Time.

Most were understanding when I’d say no — I mean, I’d just gotten out of a four-year relationship and wanted to flex my independence for a while. Then there were those who’d say they understand and bust out the whole “I’m going to change her mind” move. (Awkwarrrd.)

Then, I met Ben: tall, great voice, well-dressed and hired for our customer service desk. While he gave off every sign of being a stage 5 clinger, it was recently pointed out to me that maybe the guys who liked me weren’t clingy — maybe I was a commitment-phobe.

“There’s a chance you could be pigeonholing people who show genuine interest into ‘stage 5 clingers’ when you feel a connection or vibe with them,” says psychotherapist and relationship expert Kimberly Moffit. “It’s important to discern whether your impression is based on their actual behavior or your internal fight-or-flight response.”

It was definitely something to consider. After putting so much of myself into my previous relationship, it made sense I’d guard against history repeating itself. There were a lot of qualities I did like about Ben — like how he actually found my social awkwardness charming — but at the same time I didn’t want to get his hopes up only to crush them five minutes later. After much persisting on his part, I decided to go for it. After all, there was a good chance he wasn’t the stage 5 clinger I was assuming, right?

Suddenly, he was everywhere. He’d call me in the morning to see if I needed a ride to work, hover around me at work, assume we were perma-lunch buddies and automatically make our plans for the following weekend… on Monday. When we weren’t together, he’d call. And call. And call. Thankfully, texting wasn’t a thing yet, otherwise I would’ve plotted to witness a crime just so I could go into witness protection. He made me miss the days of dial-up internet when your line was busy to anyone who tried calling.

I knew enough about him to know he wasn’t a psychopath, but I’ve never been a girl who wants to spend every waking moment with someone. “This is when putting a boundary in place is worth its weight in gold,” says Dr. Jane Greer, marriage and family therapist and author of What About Me? Stop Selfishness from Ruining Your Relationship. “If he wants to get together too often, acknowledge his request and offer an alternative that works for you. Push back gently but firmly.”

Gently but firmly. Got it. “It’s important to watch how he responds,” adds Moffit. “His reaction will provide valuable information about his potential for moving forward.” Watch response. OK. Here goes nothing, I thought.

Letting him down easy

I sat him down and calmly explained the situation: If he wanted someone to do the whole pukey, wear matching jogging suits thing with, I’d rather off myself. Then, as suggested, I waited for his reaction. His face went from “crickets and tumbleweeds” to “you shot my puppy” in about five seconds flat. As terrible as I felt for hurting his feelings, at least his hurt feelings meant he was listening. “If he doesn’t listen and continues to pester you, you’ll know it’s time to move on,” says Moffit. “Any attraction you have for him will be diminished because his intense feelings will overpower them.”

Unfortunately, our relationship didn’t go any further than my confrontation. For Ben, it was all or nothing, and I respect that he didn’t settle for less than what he wanted either. I hope by now he’s found someone who looks amazing in a jogging suit.

9 Not-so-noticeable signs you’re dating a psychopath
Fear of commitment: How to get past your fears of marriage
Signs he’s ready to settle down