These sappy and inspiring love stories keep us optimistic about true love and romance! And if they teach us one thing, it’s to always take a chance. 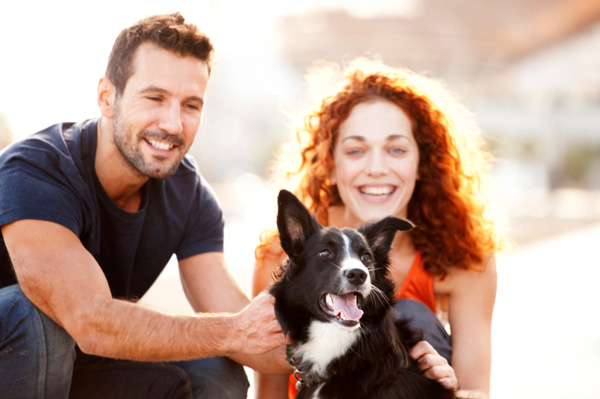 My dog brought us together

“I was walking my dog and he pulled me backwards. I turned around and Henry’s snout was in my future hubby’s crotch. The first words he said to me were, ‘What’s up with your dog?’ I muttered, ‘Henry must think you smell good.’ I ran away embarrassed, but we had a chance meeting a few weeks later at the supermarket near my house. I was squeezing peaches, and he came up to me and said, ‘I know your dog’s name but not yours.’ The rest is history.” – Eve T.

He saw my picture in a newspaper

“I had a launch party for a book I had written and The New York Daily News came and interviewed me. A short while later the full-page story finally ran and Jay stumbled across my photo. He says it went like this, ‘That’s a pretty girl!’ and then he read the whole article and texted me (my contact information was listed). He congratulated me on the book, and asked me out. We’ve been together since July of 2012 and now live together.” – Maria C.

We completed the Tulsa Run together

“After completing the Tulsa Run, I was waiting around for the results to be posted. I looked over to see this guy leaned up against the ATM and we started chatting. Once the results were posted, it was time to head home. Ryan and I departed with a, ‘see ya around.’ I got the bright idea to look up his race results online to find out his name — I knew where he was from, what age group he was in and what his finishing time was. With that information I was able to find him and sent him a friendship request on Facebook. Soon after, it was verified and later that day we spent several hours chatting online. The next day we met up and I was hooked!” – Cassie C.

I slipped him my number on a candy wrapper

“One Saturday I was invited on a date to a comedy club with a guy I had no real interest in. While there, I was instantly intrigued by a tan, muscular, bald improv comedian. I watched him all night from afar, but made direct eye contact several times. I just knew that I needed to do something, but what? When my date was using the restroom, I grabbed a pen from the table and a candy wrapper and wrote on the inside, ‘You’re awesome! Call me’ and included my phone number. After the show I shook his hand, and told him how good the show was, and in doing so I transferred the candy wrapper with my number from my hand to his, incognito. Success! The very next morning the phone rang. The guy on the other end asked if there was ‘a girl who lived there that was at the comedy show?’ Stupid me forgot to put my name on the note! I was informed later that he thought I slipped him garbage and he threw it away before being reprimanded by a fellow comedian. Seventeen years later we are happily married with two children, three cats, a dog and a great story.” – Chanda F.

I offered him licorice on an elevator

“I was riding in an elevator in the Empire State Building on my way to a seminar. He was in the elevator with me, so I offered him a Twizzler from a package I was eating. He said yes.” – Linda R.

We met on a Southwest flight

“I noticed a beautiful girl in the airport shuttle, again in the security line, and then I eventually saw her at my gate — I figured it was fate. So I sauntered up in what I thought was a cool manner and said hello. We were flying Southwest so you get to choose your seatmate. She was an “A” and got on before me. When I boarded her whole row was taken up, so I couldn’t sit next to her. I caught her eye and she gave me an expression of, “Sorry!” I sat in the row behind her and decided to take a chance. I found a business card and I wrote her a note. I asked the other couple in my row to pass the note up to her. “Do you know her?” They asked. ‘Not yet…’ I replied. She’s now my girlfriend.” – Rick B.

We met while driving down the freeway

“I was on a road trip with friends and to keep ourselves amused we began making silly faces at other drivers. Most people smiled or ignored us, but one driver (a cute guy about our age) made a face right back at us. We found this pretty funny, so for the next 10 miles or so we’d speed up or slow down to pass this car and each time we’d make a new face. Eventually the guy held up a cell phone so I wrote my number on a piece of paper and held it up to the window. He called right then. For the next two hours as we drove, my friends and I passed the phone back and forth and chatted to this stranger in the car next to us. As we approached Baltimore my friend (who had the phone at that moment) said, ‘I’m going to drop Jen off at her apartment if you want to stop by for a beer.’ I was furious. I lived alone and I didn’t want a stranger in my house. But he accepted! We’ve been married for 14 years.” – Jennifer M.

I babysat his kids in Vienna

“I met my husband in the U.S. Embassy in Vienna. He was a single dad posted there as a diplomat and needed a babysitter for his two children. As an unpaid intern, I needed the money! So I started babysitting for him, then we started dating, and three years later we were married.” – Christy G.

We met while hiking the Appalachian Trail

“I had set out on a solo hike on the Appalachian Trail in the summer of 1992. About two weeks into the trip, I came across a guy who was also hiking for the summer. We hiked about 1,000 miles together. Without the distractions (and amenities) of typical city life, you really get to know a person! We married exactly four years to the day of our first meeting.” – Roberta R.

Do you have a sweet story about how you met your significant other? Tell us in the comments section below.