Broadway star and former DWTS competitor Marissa Jaret Winokur tells us how she lost 60 pounds and how she’s inspiring others to do the same. 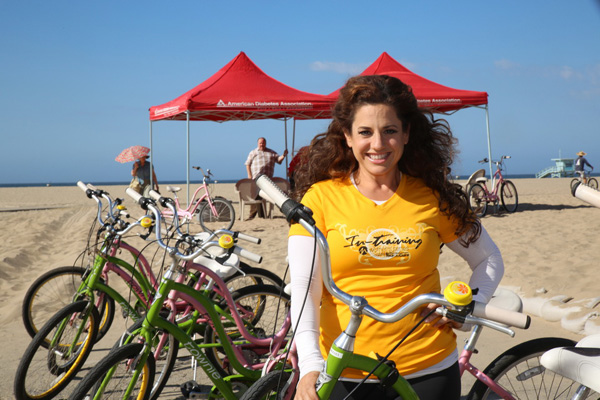 On a sunny strip of the Santa Monica beach recently, Broadway star Marissa Jaret Winokur met up with a group of fellow fitness enthusiasts for a bike ride to raise awareness for the American Diabetes Association’s upcoming Tour de Cure Women’s Series in Santa Barbara.

Not only is the cause extremely close to her heart, but as a woman who lost 60 pounds last year, fitness is something that’s extremely important to Winokur.

The 40-year-old actress has maintained the weight loss for almost a year now and continues to inspire others and set a positive example for her family, hubby Judah and 5-year-old son Zev.

SheKnows: Why did you decide to partner with the American Diabetes Association and Tour de Cure Women’s Series?

Marissa: I grew up with a girl named Carol who has diabetes and she was always pricking her finger and taking insulin. Now she is literally having a kidney transplant next week. So for me, that’s my biggest reason. It also just fits in with who I’ve become in the past year. My whole life has become about diet and fitness. They work so hand in hand. It’s a perfect fit for me.

SK: That’s right — last year you lost 60 pounds through diet and exercise! What inspired you to make such a big change?

MJW: It was looking at my 5-year-old son, and being like, “I have to pull it together.” I had bad cholesterol. Getting that news that scared me, made me realize I have to do this for my health. This isn’t about being an actress and wanting to lose weight. It’s not about fitting in cuter clothes. It’s strictly for my health. No vanity.

SK: I imagine you do feel a lot of pressure, as an actress, to fit a specific mold.

MJW: Actually, a lot of people in the business were like, “Oh, but you’re such a good type when you’re heavier.’ I’m like, ‘Yeah, but I’d rather live to be 80 and never work again.’ That’s just crazy.

SK: So, what’s the big secret?

MJW: (Laughs.) Everyone is always asking, ‘What’s your diet? What are you doing?’ There’s no trick. It’s 1,200 calories and work out every day. I didn’t feel like I had any big secret, because it’s what we’ve all been told our whole lives. For me, it was just putting it together and having the right mindset.

SK: What’s been the most difficult part of maintaining your weight loss?

MJW: Stress. We just had this big move and it’s been stressing me out. I’ve seen a lot of old patterns sneaking back in. I wasn’t doing anything wrong, but I was craving things that were wrong, just because I was freaking out. So I need to find other ways to deal with my stress. I need to get a therapist (laughs). I was really into yoga when I was trying to get pregnant with my son, and I keep saying that I need to go back to that.

SK: You talked about your son as a big reason for getting healthy. What are you doing to teach him about eating healthy?

MJW: The other day my son was eating mac and cheese, and I, of course, was not. I was eating egg whites and broccoli. He was like, ‘Mom, do you really like broccoli? Or do you just want to live to be a 110?’ I loved that! I’m trying really hard to instill those values in him without making him want to go the other way. I grew up with my parents constantly only talking about what was healthy. I wasn’t allowed snacks, and my best friend was allowed Doritos, M&Ms and soda. So I was always like, ‘I’m going to Nancy’s house.’ I don’t want to do that to my son.

SK: What are some of your favorite healthy snacks?

MJW: Almonds and green apples. You can eat a whole bag of almonds for only 240 calories, and I guarantee you will be full.

SK: As a busy working mom, how do you fit in your workouts?

MJW: I hired a trainer. I’ll run and hike on my own but I’ll never do sit-ups. I’ll never lift weights. This is the first time I’ve done weight training. I also walk my son to school. It sounds crazy, but I know if I moved here a year ago, I wouldn’t have done that. I would have hopped in the car. Now I’m like, ‘Oh, this is magical.’ It’s nice.

SK: Halloween is coming up. What are your tips to avoid overindulging in candy?

MJW: Don’t buy candy! That’s the only way. If you have to, pick candy that’s not going to kill you. Don’t buy the Snickers. For Zev, because he likes giving it out, I bought Jolly Ranchers. I can eat two and it’s like nothing. Then, after your kid has their candy, get it out of the house. If it’s there, it will call you in the middle of the night. I get so mad at my husband because sometimes he’ll buy a bag of Hershey’s Kisses. I will eat a whole bag of Hershey’s Kisses! So just get it out.

SK: What about other holidays coming up, where food is the main event?

MJW: You have to bring your own food. When you go to a holiday party, bring the salad, because then you know not to put cheese in it or to put the nuts on the side. I make a great salad and I don’t put dressing on it. I put grilled chicken. I know that’s what I’m going to eat. At dessert time, do not get your own plate. Don’t be polite. Take a bite off whoever’s plate you came with, but don’t sit down with a plate of dessert. If it’s in front of you, you’ll eat it.