Yes, it’s important to be yourself on a first date. But, it’s also a good idea to steer clear of a few controversial, gross or unintelligent topics of conversation. Here we list 25 topics not to bring up on a date. 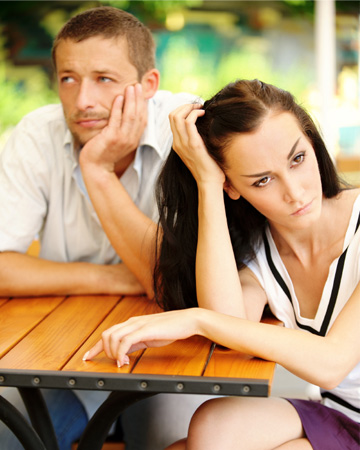 Golf is boring. Tiger Woods is a douche. You don’t want to be boring or douchey on a first date.

Resist the urge to ask him to take one with you and then post it on Facebook. It’s a first date, you’re not marrying the guy (well, not if you do this anyway).

I love cats as much as the next person (or more… much, much more). But that doesn’t mean it’s an acceptable topic of conversation.

Save it for girls’ night out.

He simply doesn’t care that you’re saving up for an Hermes bag or that you’re due for more highlights.

You just can’t win with this one. Either you’ll seem too promiscuous or too prudish. There’s no middle ground.

If you have an STD, now is not the time to bring it up (see #6), and if your dog is dying from pancreatitis, don’t be a Debbie Downer by mentioning it.

Even if you think it’s a hilarious story, it certainly won’t make him think you’re marriage material.

While he may think you need rehab because you just told that drunken story that I told you not to, it’s probably best to keep mum regarding any type of therapy or rehab until you get to know him better.

Womp, womp. Instead, bring up a safe and neutral news topic.

Wait, you have (fr)enemies? Do you live in a Glee episode? Besides, badmouthing anyone won’t make you look like a classy lady.

I don’t care if you’re a gastroenterologist — don’t go there on a first date.

OK, I’m guilty of this, and it drives my husband up a wall. For the sake of first impressions, please don’t speak in abbreviations or acronyms.

I will punch you in the face if you say “hashtag” in verbal communication.

Mention this as your favorite movie and you’ll find out what it’s like to lose a guy in 10 seconds.

Shy away from creepy, dark subjects. Plus, his opinion might piss you off.

“Who are you texting?”

Uh-oh, he has a stage-five clinger on his hands.

While you’re imagining what your future kids will look like, he’s deciding between a Stella or a Jack and Coke.

We all have them. Should your relationship progress, he’ll see your bad habits in due time. Don’t rush it. Just as you don’t want to know that he pees in the shower.

It really is a fascinating TV show. However, if he says he would love to have multiple wives, or says more than one wife would be a nightmare, he just can’t win this one.

Asking smart, relevant questions is always a good idea — everyone loves to talk about themselves. But don’t grill him about what he’s learned from his mistakes or where he sees himself in five years or he’ll feel like he’s being interrogated.

You shop at Whole Foods? He’ll be afraid he can’t afford you.

How you want to improve yourself

Whether you tell him you want to lose weight, purchase a new wardrobe or grow out your hair, it will reek of insecurity.

Telling him all of your life’s regrets or bad decisions is too much, too soon.

This isn’t so much a topic, as much as a behavior. Don’t belittle your date. If he orders sangria, don’t tease him for ordering a “girly drink” (really though, you should be worried).

Signs you should not go home with him
Should he pay on a first date?
Ways to rock a first date