From photos of unthinkable poses and inspiring messages to how-to tutorials and monthly challenges, the world of social media is completely revamping the way we practice yoga, one “like” at a time. 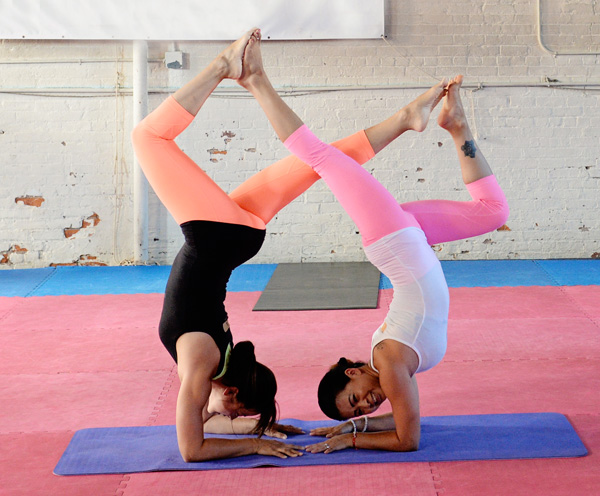 Unless you’ve been hiding under a rock (or somewhere without Wi-Fi), you’ve probably heard of and witnessed the yoga sensation sweeping the Instagram nation. You can’t log in these days without a photo of some incredible back-bending, side-twisting, head-balancing yogi popping up on your popular page!

Needless to say, these Insta-yogis are gaining quite some notoriety. And while I’ll admit I’ve interviewed a fair share of celebs in my day (from cast members of Glee to the British boy band the Wanted), these next social media stars I’m about to introduce top my list of interviewees — and it’s all thanks to some fancy filters and impressive IGs!

Who am I speaking of, you ask? Well, none other than Laura Kasperzak and Masumi Goldman, two of Instagram’s most inspirational yogis! These ladies have created an enormous amount of buzz over the past year and a half, with a combined total of 500,000-plus followers on Instagram. Not too shabby for “two fit moms” from Jersey!

Read on as SheKnows chats with Laura and Masumi to get the 411 on how they created their Instagram empires and what the future has in store.

Laura Kasperzak (@laurasykora) is a 36-year-old mother of two and a software company employee. She first began her yoga practice 17 years ago as an addition to her already existing exercise routine. Laura’s family is a key focus of her yoga practice. She loves being able to connect with her husband and children through teaching them new poses and involving them in her photos. You can often find guest appearances by her 3-year-old daughter (aka her “mini”) and hubby on Instagram. Every now and then, she even manages to convince her 7-year-old son to join in on the fun! 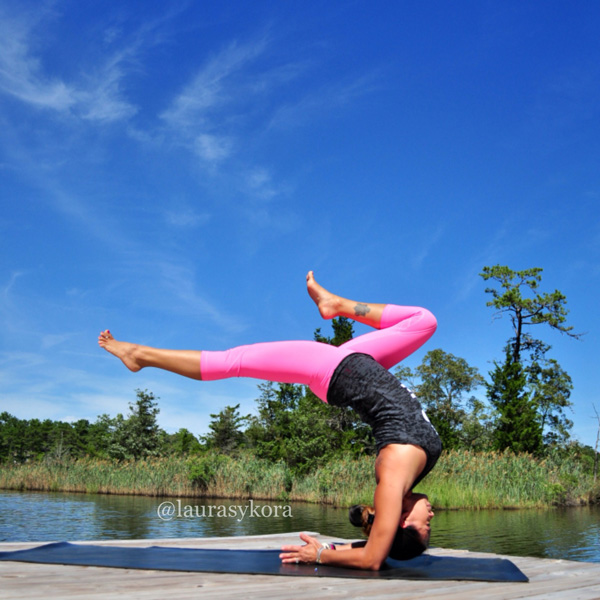 Laura Kasperzak: I had no idea what Instagram was until my niece told me to sign up back in March 2012. I signed up and posted two or three pics. In June or July, I started playing around more with poses and taking pics. At that point, I started to learn how to use IG and began following other accounts. By August 2012, I was posting regularly the poses I was doing that day. I loved seeing my progress, so that October, I decided to go strictly yoga, every day for at least one hour. I haven’t looked back since.

SK: How did you create such an enormous following?

LK: Initially, I created a following by finding other yogis and following them; also just by being active and connecting with users. I got involved in my first “yoga challenge” in October 2012, which brought me more into the spotlight. I’ve been doing a challenge every month since. At one point, I started making the “popular page,” so my account was being discovered by people who may not do yoga. I think people love that I actually read my comments and respond. So many big accounts never interact with their followers. Today, I have almost 424,000 followers.

SK: What’s the craziest thing that has happened to you so far as a result of your Instagram fame?

LK: One was being featured in the New York Times and the other was being recognized at a rest stop in upstate New York. So crazy!

SK: How has posting photos of your yoga poses improved your practice?

LK: Taking pics and videos has made me much more conscious of alignment and practicing poses correctly. It’s amazing how you can think you are correctly aligned but then look at a pic and see how off you really are. 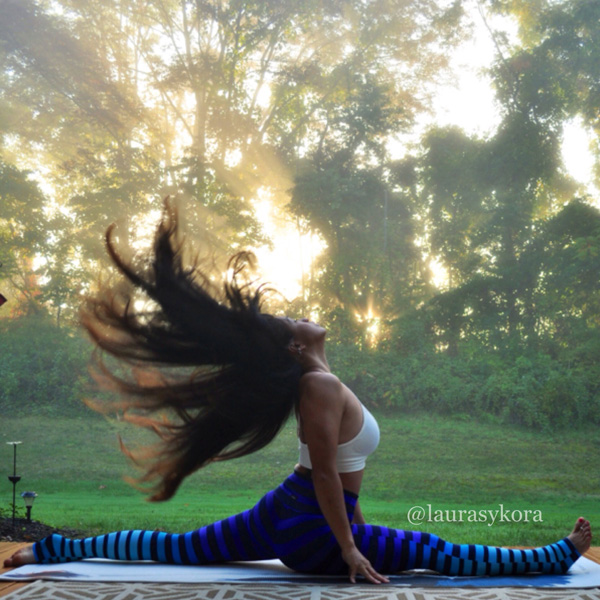 SK: What’s the best part about all this notoriety you’ve been receiving?

LK: The best part is inspiring people to start yoga. I get so many beautiful comments from people telling me how they’ve changed their lives and health because of me. I want to give women, especially mothers, hope that they can have kids, a job, a spouse and still be healthy and strong. No matter what your age is, you can improve yourself by practicing yoga.

SK: What advice would you give to aspiring yogis looking to improve their practice or build their following on social media?

LK: For aspiring yogis, be patient with your practice. Do not force poses; you can get injured. As for growing your social media account, just be involved and interact!

SK: What do you have planned for the future?

LK: My plan is to eventually leave my “real job” and teach yoga full time. I’m excited about the possibility of doing a couple of yoga retreats next year and traveling more.

Masumi Goldman (@masumi_g) is a 36-year-old mother of two and a former Wall Street analyst and MIT graduate. She first discovered yoga through the help and advice of her long-time friend and fellow Instagram yogi, Laura Kasperzak. Masumi uses her yoga practice to help heal and rehabilitate parts of her body that lost flexibility after months of inflammation and chronic pain due to an autoimmune disease that used to often leave her immobile. 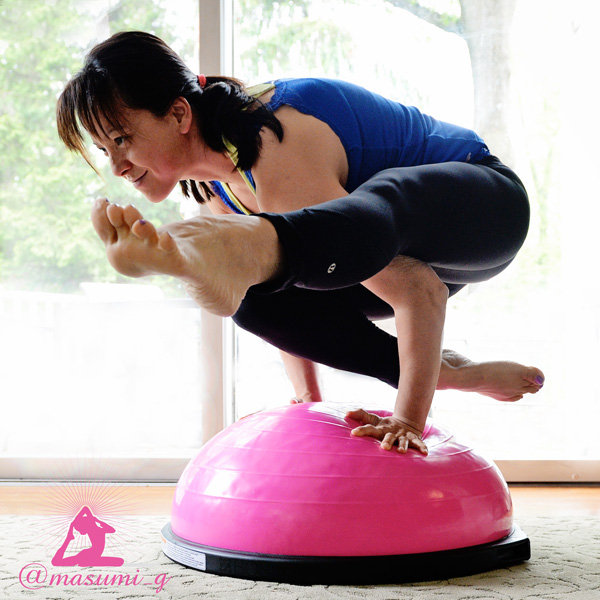 SheKnows: What first made you decide to start posting yoga photos on Instagram?

Masumi Goldman: In the fall of 2012, my friend Laura suggested that I try practicing yoga as part of my fitness and healing plan. For months, I battled painful symptoms of an autoimmune illness that attacked my tendons and joints. I decided to take Laura’s suggestion and started practicing yoga. I posted my first photo Oct. 7, 2012, and have been documenting my journey ever since.

SK: How have you built a following of nearly 80,000 people in such a short amount of time?

MG: I built my following by getting involved very early on with hosting daily yoga challenges. Back in February 2013, when Laura and I (along with another Instagram yogi) hosted an arm balance challenge, the Instagram yoga community was quite new. Creating multi-photo collages with written instructions was time-consuming, but it really helped us draw an audience because people wanted to know how to get into the poses. Since then, we have hosted a daily yoga challenge every month.

SK: What do you think separates your photos from the rest and makes them so popular?

MG: I use a Nikon DSLR with a variety of lenses, and I am aware of the lighting and composition of each of my photos, as well as the clothing that I am wearing. All of these factors contribute to the overall aesthetic appeal of the photos that I post, and I believe that makes a difference. 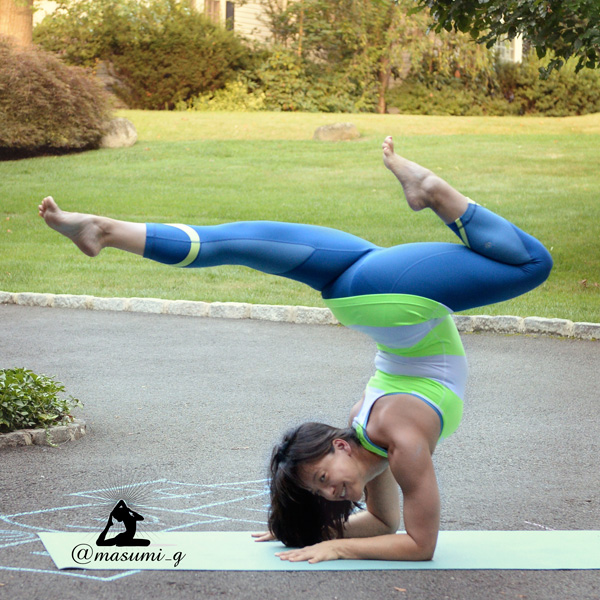 SK: What’s the craziest thing that has happened as a result of your Instagram fame?

MG: The overwhelming positive feedback that I’ve received through my Instagram account has inspired me to completely change career paths. I attended a 200-hour yoga teacher training program (along with Laura), created a yoga business (Two Fit Moms LLC), and began teaching classes and workshops with Laura each week. It’s absolutely crazy to think that all of this came about because of the feedback and inspiration I’ve received through Instagram.

MG: I have only been practicing yoga for about one year, and one year ago, I wouldn’t have believed it if you told me that I would now be a yoga instructor and be able to balance upside down. Who could imagine that you can train your body to do brand-new things at this age, after having two kids and battling an autoimmune disease? It feels miraculous, but the fact is, I believe anyone can do it. I want to inspire others to realize that they are capable of far more than they think. If I can do it, anyone can.

SK: What advice would you give to aspiring yogis?

MG: The most important piece of advice I can give is to practice regularly. Take classes in a studio, practice online, join the Instagram yoga community. It helps so much to be involved with a group of people that share the same interest and celebrate each yoga breakthrough that you have.

SK: What are your plans for the future?

MG: Laura and I are continuing our weekly yoga class, which we offer for only $5. We feel very strongly about making yoga accessible to everyone. We are also planning to travel around the country to offer our workshops in the coming months and are continuing to build our website (twofitmoms.com) to be a one-stop hub for yoga, fitness, nutrition and overall wellness.

Want more yoga-spiration? Check out these other talented and inspiring Instagram yogis!

3 hrs ago
by Nikesha Elise Williams

6 hrs ago
by Mouthy Mandy