Looking back on your wedding, would you still have chosen the same women as your maid of honor and bridesmaids? And why is it that some relationships sizzle whereas others fizzle? 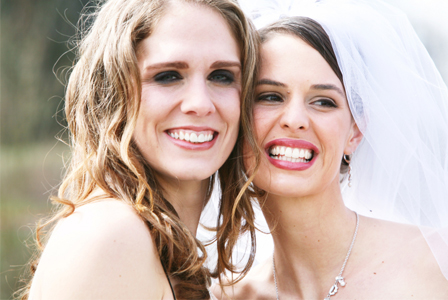 I’ve been maid of honor in two weddings (so far), and while it hasn’t quite been 10 years, I’m pretty confident that I’ll stay good friends with both women throughout our lives. I only have a handful of close friends (those women included), though, so it isn’t too difficult to maintain the relationship. Between work, raising kids, maintaining a relationship with my husband and keeping up with household chores and bills, I really don’t have time for more than a few close friends, and quite frankly, I like it that way! Here, women are sharing their stories on whether or not they would choose the same women to be in their wedding — 10 years later!

I’ve been married 15 years and had six bridesmaids in my wedding party. I’ve maintained all my friendships over the years, but obviously some are closer than others. We have seen each other get married and some now have kids while others are still trying. We try and establish outings, dinners, late night desserts and girls’ nights so that we can make time for each other. We also get together as families. I’ve noticed that if you grow together through similar life stages, it’s oftentimes easier to maintain those friendships. — Wendy

We’ve drifted over the years…

I got married immediately after college and most of my bridesmaids were sorority sisters. While we were best friends at the time, we’ve drifted apart over the years. It’s been 12 years since I got married, and most of the girls moved out of state and started their own lives. As much as I’d like to say we’re still close, that just hasn’t happened. There aren’t any hard feelings, but between working, living thousands of miles away from each other and having separate lives, our relationships with each other just haven’t been a priority. — Emily

What types of relationships don’t make it?

Wedding planner Kia Martinson has been in the business for 10 years. She states, “I can usually tell what bridesmaids are there for the right reason. There are always one or two girls that are almost an obligation for the bride, be it that they were in their wedding or they are somehow related. When the bride feels obligated to have someone stand up there for them or the bridesmaid feels that she can’t say no, these are the relationships that don’t tend to make it.”

Why some friendships sizzle and others fizzle

Relationship expert Andrea Adams-Miller shares that relationships fizzle due to:

To make a relationship sizzle, she shares, “both parties have to be equally positive to maintaining the relationship or they have this invisible turn-taking ability to be the front runner of the friendship when the other cannot and vice versa.”

Would your bridesmaids still be in your wedding 10 years later? Share in the comments below!