You meet and fall in love with the man of your dreams — only to then find out your religions don’t match. Hear what these readers have to say when it comes to marrying into a different religion. 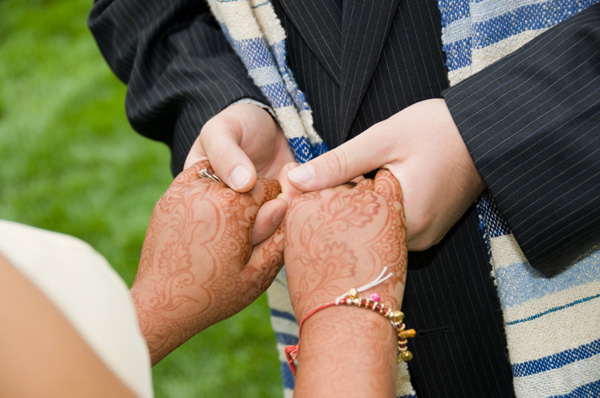 Did you know that about 25 percent of households are of mixed faith? How do those in a mixed-faith marriage make it work? What about when kids are factored in — how do you go about raising them? We’re hearing from readers in mixed-faith marriages on what it’s like and how they make it work, plus we’re providing some practical advice to those who married into a different religion.

My wife and I are embracing each other’s religions by having three different weddings! For the first, we were married civilly in Las Vegas at the County Clerk’s office. The second wedding will be in honor of her religion — which is Buddhism. She is primarily planning this wedding with my help on the side. The third, and final, wedding will be in honor of my religion — Catholicism. I am planning this wedding with a little bit of help from her. As far as raising kids, we plan on bringing them up respecting both religions, but of course, we’ll cross that bridge when it comes. — Tom

Our biggest struggle was extended family…

Jon, a Catholic, and Michal, a Jew, are experts on what it’s like to marry into a different religion. Authors of the book Mixed-Up Love: Relationships, Family, and Religious Identity in the 21st Century, they said their biggest struggle was extended family. Jon’s family is very conservative and they had a hard time welcoming Michal into the family. Once they got to know Michal, though, the concerns seemed to fade away. Together they have one daughter, whom they’ve decided to raise Jewish. Jon still finds a way to maintain his religion outside the home, but inside the home they’ve agreed to practice Judaism. They both agree that communication is what’s most important when marrying into a different religion. — Jon and Michal

Tina B. Tessina, Ph.D., (aka Dr. Romance) psychotherapist and author of Money, Sex, and Kids: Stop Fighting about the Three Things That Can Ruin Your Marriage, offers the following guidelines:

Did you marry into a different religion? What advice do you have on making it work? Share in the comments below!

10 hrs ago
by Tarah Chieffi

17 hrs ago
by Anabelle Bernard Fournier