Texting has become one of the most popular forms of communication and can tell you a lot more about a guy’s personality than you may realize. I’ve had several years of experience translating text messages from men. Here are a few things to look for. 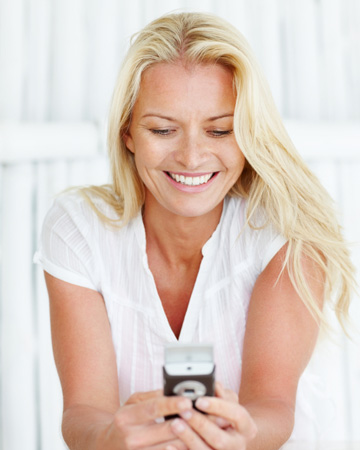 The one and done

If a guy texts you, you text him back and then the conversation is over, he’s not boyfriend material. He’s using texting much like a fly fisherman uses a rod and a fly. He’s casting out as many different things as possible to catch someone. He may also be bored, or worse, in constant need of attention. If this happens frequently, you are in a texting relationship with a player.

This guy is formulating his response before you even get done with yours. He’s a rapid fire texter. This could mean a couple of things. It may just mean he’s kind of lonely. It could mean he really likes you. But it could also mean he’s annoying as hell. The way to tell is if he’s considerate of your schedule before he launches into one of his texting dissertations. Does he start with, “Hey what are you doin’?” or “Is this a good time?” If he does that, it means he’s polite and just really enjoys communicating with you. Just make sure he’s not…

When you are dating (or considering dating) someone, texting can be a fun and safe way to “get to know someone.” But there comes a point, relatively early in the relationship, where a guy has to be comfortable calling you or actually seeing you in person. These phone conversations don’t have to be verbal strolls down the beach (although some women like that) — they can just be him checking in to say “hi” and to make plans for later in the week. Hearing his voice is nice and knowing he is capable of verbal communication is important. If you have an exclusive texter, he may have confidence issues or he may just be lazy.

We love us a charmer, don’t we ladies? Show me a woman who doesn’t love getting the, “Hey beautiful. Just thinking about you” text and I’ll show you a woman with no pulse. If a guy does this randomly, at a respectable hour, he’s probably a well-intended man who is interested in you. If it’s your long-term boyfriend or husband who is texting you like that, you’re a lucky woman. Note: If a guy texts you this at 3:00 a.m., it’s a booty call.

Is there anything more aggravating than trying to have some texting fun with a hot guy you are digging and he won’t play along? How infuriating, right? If you are texting a guy who only texts every third day or so, and then stops texting after a few exchanges, he’s stringing you along. He likes to keep his options open. He doesn’t want to ignore you entirely, but he’s not that interested either. I hate to be this blunt, but this guy is a cheater. He wants you, but he wants someone else too. Sorry to be the bearer of bad news.

If you reach out to a guy more than once and he doesn’t text you back, it doesn’t reveal a personality trait so much as it tells you he’s not feeling it.

If you text this guy more than once, be warned — you’re “that girl.” Yep, sorry. You’re a Stage 5 cling-on that the guy is complaining to his friends about. Since we kind of beat up the boys a little bit, we should touch on how not to become “that girl.”

Make sure that whoever is initiating the texting conversation is equal. In other words, if you are always starting the conversation, you’re probably “that girl.” End the conversation reasonably. Go back and forth seven to 10 times, max. Be the one who “has to go.” Example: “It was so much fun hearing from you! I know you’re busy and I have to get back to work. Let’s catch up again soon.” You are being polite, but you are the one ducking out. Guys hate it when women text relentlessly or have to have the last word.