Can men and women be friends? It’s a question that has plagued the sexes since the first man and woman went for their little stroll in the garden. More correctly, it’s been a question for women, because men already know the answer. And the answer is no. 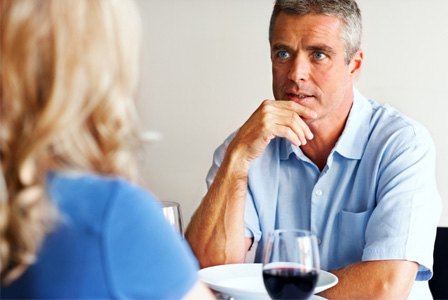 About the columnist: You know how one minute you’re in a happy and fulfilling marriage and the next you find out that your husband of 20 years has been cheating on you with someone 10 years younger? Well, I do. I went from country club wife and mother of high school students to a single, 39-year-old “cougar.” In this weekly feature, I will share with you all the mind-boggling, head-scratching, is-this-someone’s-idea-of-a-joke moments from my so-called single life. Consider this your private invitation to my tremendous learning curve…

How can I be so sure?

Guys, no matter what they say, want to get with you. Period. How do I know this for sure? Because I have tried on more occasions than I can count to be a man’s friend, and they are not interested. They pretend to be interested. A guy will hang out with me for a few weeks without having sex, but he’ll eventually move in for the kill. Having discovered that guys have zero interest in platonic outings, I devised what I thought was a fool-proof plan.

Let me spell it out for you

I have these friends who insisted I meet their friend “Tom.” I had no interest in meeting Tom. I’m in a dating timeout and even if I wasn’t, Tom still isn’t divorced (after being separated for two years, which is, say it with me folks — a red flag). When Tom started to Facebook message me a few weeks ago saying we should meet, I relented. However, I did stipulate the following in my reply to Tom.

“Hey Tom, I’m open to meeting people to do things with — go golfing, go to a baseball game, grab a glass of vino, but I’m not into dating right now. If you are OK with that, I can meet up with you, and if not I completely understand.”

Pretty plain English, right? So you can imagine my surprise when after Tom and I had a nice enough evening (though I really wasn’t feeling him on a romantic or friend level by the end of the date), he drove me to my car and said, “Want to come back to my place for a bottle of wine?” It was 11:15 p.m. In my mind, the “meeting” was over before Tom’s late night invite. Why didn’t Tom just say what he meant? “Hey, can I take you back to my place and get you wrecked on wine in hopes that I’ll get laid tonight?” I would have appreciated a more honest approach.

Tom never had any intention of being my friend. He played along for a few hours until he thought his window of opportunity was closing and he panicked. A guy I know explained to me that Tom had to do that, that any guy in their right mind would do what Tom did and that I was being unrealistic for expecting otherwise.

So you see, you can spell out to a guy, “Not interested in anything outside of a friendship” and he’ll still think he has a shot — and in fact, feel like he has a responsibility to try. In my experience, men don’t want to be my friend. Men are sexually motivated individuals, and there is nothing wrong with that — unless you just want to be friends.

More from this author

The time I mixed booze, Facebook and my love life
When is it OK to go to dinner with a married man?
Staying the night seemed like a good idea at the time