Most women look forward to the day their boyfriends will propose and expect something totally magical and over the top. But lots of men are clueless. These days, women are taking matters into their own hands to get what they want… romantic, or not. 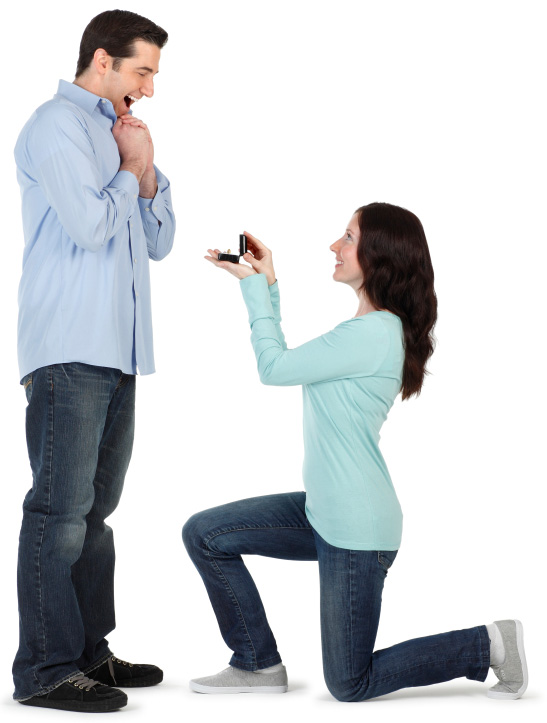 Most women look forward to the day their boyfriends will propose and expect something totally magical and over the top. But lots of men are clueless. These days, women are taking matters into their own hands to get what they want… romantic, or not.

Here are real-life stories of women who proposed to their boyfriends, and how that turned out for them.

“I was with my boyfriend for three years and got pregnant. It wasn’t a romantic proposal, but I asked him to marry me. In short, I said, ‘I am pregnant and I’m keeping the baby. The baby can carry my last name or yours, but if it’s yours, we need to get married and make it official.’ We were married on Maui. I was literally barefoot and pregnant by seven months.

“He’s my ex, so you can tell how the deal worked out, but we got a number of good years out of our marriage. He ended up developing a drug addiction and I couldn’t go through rehab with him a fourth time. I walked away. However, in the beginning it was a good relationship and we ended up having three boys together.” — Sandra R.

“I proposed to my husband almost exactly four years ago! I believe that if women want equality, we need to subscribe to it in our relationships — gender equality begins at home. And, since we had already discussed the date of our potential wedding, I figured we should seal the deal since we’d only have 10 months to plan as it was! I didn’t get down on a knee, just simply brought it up in conversation and told him that we should go buy rings and get engaged so we could get this party started. He agreed, and off we went! I wish women would stop waiting around like it’s 1866 and take control in every aspect of their lives.” — Jenny S.

“I asked my husband to marry me on Sadie Hawkins Day many moons ago! We married in 1989 and are still married today. Back in 1988 we were living together and I wanted to know if he was committed to getting married. I asked him and he said yes. His proposal came later that summer with a ring in a Cracker Jacks’ box. Three children and many years later, we can retell our story.” — Judy H.

“My wife proposed to me on New Year’s Eve in 2000. At the time, I was so stunned I replied, ‘I’ll get back to you on that.’ I had already confirmed my bachelorhood, and I think I was too concerned with Y2K that evening. However, 18 months later I realized I owed her a big finish to her very courageous question and I accepted on the Peak in Hong Kong by simply saying, ‘yes’ (to a question that had not been addressed for a while). We spent the week ring shopping in the world’s most amazing shopping center. We laugh about it now and have been married for 10 years.” — Roger M.

“A few years ago, my ex-girlfriend, whom I had been dating for about two-and-a-half years, kept insisting that we get married. I was so turned off by her aggressiveness that I decided that I was not interested and I broke up with her. Let men do the big, grand gesture; that’s our job.” — Dan N.

“I had a romantic proposal planned. I was going to surprise her by having all of our friends and family present at dinner, getting down on one knee and popping the question. But a week before it was all supposed to go down, she proposed to me — and totally ruined my plan! She didn’t have a ring, but she did get down on one knee, which made me feel totally uncomfortable and emasculated. I was so upset that I said no. Eventually, we ended up working through it and our wedding is planned for next spring. But I never did follow through with my proposal plans.” — Justin R.