Florida singers Alex Kinsey and Sierra Deaton made our jaws drop Wednesday night on the premiere of FOX’s The X Factor with their original take on Britney Spears’ “Toxic.” We chatted with the couple after their big audition to find out how they make beautiful music together… both on stage and off! 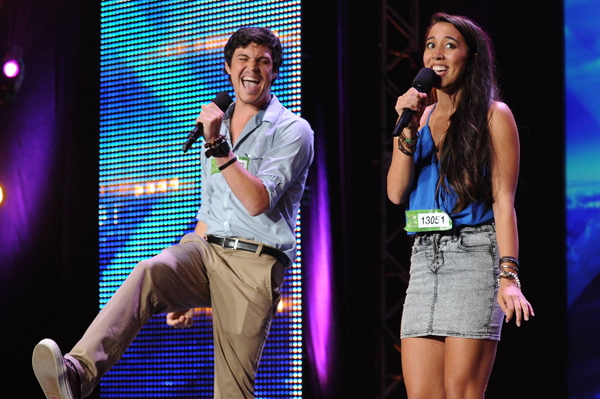 We knew Alex Kinsey, 21, and Sierra Deaton, 22, were something special when they stepped on stage Wednesday night to audition for FOX’s The X Factor. The judges’ panel — including new additions Paulina Rubio and Kelly Rowland — agreed.

“I feel like I’m looking at a couple from The Notebook,” judge Demi Lovato told the pair after they performed their seriously sultry version of Britney Spears’ “Toxic.”

Why perform as a duo? They’ve been doing it for a while now — they even opened for Taylor Swift and Ed Sheeran during their Orlando stop.

“We decided to come and audition together because I think that the chemistry that we have on stage is something special that you don’t see a lot,” Kinsey told the cameras.

And they’re right! The judges couldn’t stop raving about the duo and passed them on to the next round. We got a chance to talk to the pair after their big television debut to find out more about their relationship and how they make it work.

SheKnows: How did you decide to pursue music as a couple?

Alex: I had been playing gigs for a few years prior to us dating, and when we started dating, I caught wind that Sierra could sing. So, when she would come to my gigs, I would drag her up on stage to sing a song or two. She was always pretty reluctant to perform with me, but as we would practice more and she would perform more, she would get more and more excited and eager to sing.

Sierra: Yeah, now he can’t get me to sit down once we start singing.

SK: How has singing strengthened your relationship?

Sierra: I think that any relationship can be strengthened if you share a passion, whether it’s singing, dancing or working out, as long as there’s something you both care about and want to share with each other. What is there to fight about when you’re both working toward a common goal? Especially one that you are both passionate about.

SK: How do you deal with disagreements when it comes to your career?

Sierra: As of yet, we haven’t had any disagreements about our career…

SK: How do you put any personal drama aside when it’s time to perform?

Alex: I mean, we both look at music not only as a love of ours but also as a serious career choice, so we know we have to approach shows and things professionally, so that mindset helps. But when you really get down to it, we both love performing, and love music in general. So, it’s really difficult to be upset about things in our personal life when we know we are doing something we love — and making people happy while we do it.

SK: Do you have any advice for other young couples?

Both: Know that love isn’t perfect and there will always be things that you get tweaked about. But if you can work through issues maturely and be agreeable with each other… and make sacrifices for each other, then love will win out. Rely on the unshakeable feeling that you get around your significant other, and good things will follow.

Night 2 of The X Factor season premiere is tonight at 8/7 p.m. Central on FOX. Be sure to watch every Wednesday and Thursday night to see how Alex and Sierra progress in the competition. We think they’re certainly the duo to beat right now.

See Alex and Sierra audition live on The X Factor

What did you think about Alex and Sierra’s performance on The X Factor? Sound off below!

Is happy the new sexy?
True story: Cooking together did wonders for my marriage
Outdated dating rituals we’re glad went away

24 hrs ago
by Jessica Toscano