Sure, you’ve done power yoga and hot yoga and maybe even yoga on the beach or on a paddle board, but there are much more unique ways to stretch and twist on your mat — and we’re sharing five of the weirdest. 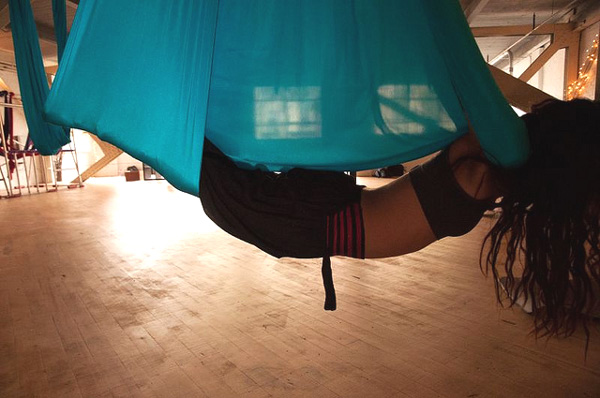 We asked Peggy Hall, creator of the best-selling Yoga for Surfers® DVD series and BABY ON BOARD® Pre-Natal Yoga, for her picks for some of the strangest forms of yoga. “When I first created Yoga for Surfers back in the early 2000s, it was among the very first of the ‘specialty yoga’ genres. Now there’s laughter yoga, naked yoga and hip-hop yoga,” she says. But have you heard of these?

Yoga and breathing go hand in hand, and harmonica playing requires breathing, so someone decided to join the two in one of the weirdest types of yoga we’ve ever heard of. Hall explains that creator David Harp combines the physical postures of yoga with what he calls a “HarMantra”, a breathing pattern that, according to Harp, produces a pleasant and relaxing tune when played on the harmonica. “This gives a whole new meaning to ‘om’ and is good for anyone who wants to try ‘blow their blues away’ according to the website,” she notes.

If you’ve ever wished you were a Cirque du Soleil performer, aerial yoga (also known as anti-gravity yoga), might be for you. This unique form of yoga has students performing dance, gymnastic and trapeze-style moves in silk hammocks suspended from the ceiling. “The ‘anti-gravity” aspect comes from using the hammocks to execute upside-down poses,” explains Hall. These inversions performed with a sling are designed, according to the website, to “lengthen and elongate the spine”. Anti-Gravity Yoga is not for the faint of heart, says Hall, or those with vertigo and anyone with wrist, hand or finger problems as a certain level of arm and grip strength is required. 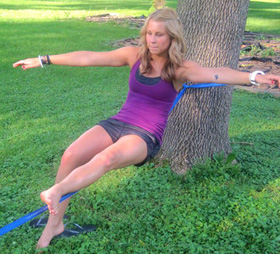 Created by self-titled professional “slackers”, Slackline yoga entails doing your yoga poses on a tightrope or slackline — a 1-inch piece of webbing rigged between two trees. “YogaSlackers, as the adherents describe themselves, are much what you’d expect them to be: long-haired, pony-tailed, T-shirted, baggy-panted performers of sorts, drawing wide-eyed, slack-jawed observers blinking in amazement at what these unusual types of yogis are demonstrating,” notes Hall. Best suited for anyone with soft bones, great balance and no fear of heights.

Forget water aerobics class, aqua yoga puts a new twist on getting fit in the pool. “It’s a low-impact but high-performance fusion of strength, balance, cardio, stretching and breathing,” says Hall. “Classes adapt yoga poses to the water and often use foam dumbbells and ‘noodles’ for resistance training.” She notes that this is an excellent yoga option for anyone recovering from injury and who wants to avoid impact on their joints, or for those who may be carrying more weight than is comfortable for their frame, as the buoyancy of the water provides a lightness and support. “It’s also fabulous for expecting moms, the moves can be easily modified and the weightlessness brings relief to sore backs and tired legs.”

It’s not just for strippers anymore, poles can be incorporated into your yoga routine. This type of yoga fusion combines various other disciplines such as dance and gymnastics, and of course, requires strength and flexibility if you don’t want to fall (or slide off) the pole. Hall isn’t entirely sure how pole yoga is different from pole dancing, but notes that the creators ensure us that anyone can try pole exercise, no matter your gender or fitness level. “If you’re bored with traditional yoga on a mat, or just want to add a little sizzle into your life — check it out!”

23 hrs ago
by Caitlin Flynn