Think you have what it takes to race in the desert? How about through the jungles of Peru? We’re sharing some of the toughest races out there and what they involve. 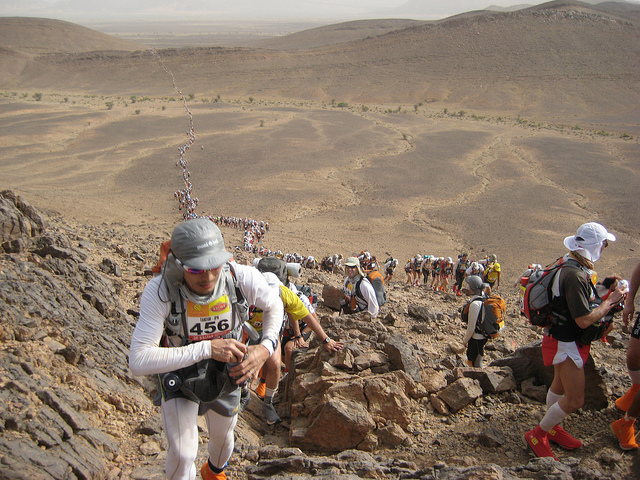 Competitors in this frigid race run on ice and snow in an average windchill temperature of –20 degrees. The Antarctic Ice Marathon is the southernmost marathon on earth and the only marathon run in the interior of the Antarctic. Competitors fly by private jet from Punta Arenas, Chile, to the marathon location at Union Glacier to start their five days of racing. A marked course of 26.2 miles is prepared ahead of time and snowmobile support, aid stations and medical personnel are on hand throughout the race.

Ranked by the Discovery Channel as the toughest footrace on earth, the Marathon des Sables was started in 1986 and is now in its 28th year. The gruelling race has competitors running the equivalent of five and a half marathons in five or six days, a total distance of around 156 miles in one of the world’s most inhospitable climates — the Sahara desert. The rules require racers to be self-sufficient, which means that not only are they slogging through the Sahara, they are carrying everything they need to survive on their backs except water. You get a spot in a tent to sleep at night, but anything else you need you’ll be carrying.

Most non-athletes are awed by a regular triathlon — swimming, biking and running over long distances. But this one, a 300 mile continuous triathlon challenge is a little different. The Enduroman Arch to Arc links London and Paris via an English Channel swim. The challenge starts at London’s Marble Arch with an 87 mile run to Dover, swimming to France and finishing with a 180 mile bike ride to the Arc de Triomphe in Paris. Think you’re ready to give it a try? You’ll need to have a six hour sea swim in temperatures of 16 degrees or less in the year of your attempt to prove you have what it takes.

Often described as the toughest and most beautiful race by its competitors the Jungle Ultra is an endurance test like no other. Competitors race through five stages, along 143 miles of jungle trails, mountain roads and village tracks that lead down from 10,500 feet in the Cloud Forest to the Amazon Jungle below. Racers need to carry their own supplies but they can refill their water along the way at check points and base camps. Otherwise, it’s a solo trek through the jungle.

Another ultra-cold ultra-marathon, the 6633 Ultra is a non-stop foot race over a distance of either 120 miles or 350 miles. The number in the name refers to the latitude in degrees and minutes of the Arctic Circle where the challenge takes place. Both races cross the line of the Arctic Circle, with the longer race continuing to the banks of the Arctic Ocean. Competitors will be expected to carry or pull on sleds all their provisions for the race including food, cooking items, clothing, sleeping kit and other safety gear. Racers going the full 350 miles are allowed two drop bags for limited essential gear at approximately the 120-mile mark and the 230-mile mark. Only 11 athletes on foot have so far managed to complete the 350-mile race.

4 hrs ago
by Nikesha Elise Williams

7 hrs ago
by Mouthy Mandy