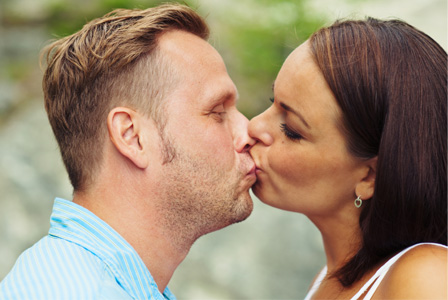 Still, I’ve learned through much field experience and reflection that you can actually learn a lot about a guy by the way he kisses. Here are a few examples to support my theory.

When I was separated, this guy at the country club who was kind of a big deal started to take an interest in me. I thought this guy was kind of a dirt bag — he wasn’t very good to his ex-wife, and he thought he was a lot cooler than he really was. But one night I was at a golf tournament, had a little too much to drink (a common thread you’ll find in most of these descriptions) and found myself making out with Shark Face. He literally bit me, and not in a good way. My mouth felt like I’d been sucker-punched by a street thug — all swollen and throbbing. His kissing was aggressive and so was his personality. When he turned to me in the hotel lounge where we’d been listening to music and said, “Let’s get a room. We don’t have to have sex,” I wanted to say, “I’m newly separated. Not stupid.” I realized Shark Face smelled blood in the water and I bolted.

Messy Mike and I were in his backyard. It was a beautiful night, the wine was flowing and so we started to suck face. Mike’s kissing wasn’t bad per se — it was just all over the place and he smacked, making what my parents called at the dinner table growing up “pig noises.” I didn’t think much of it. The kissing wasn’t dreadful and he was a nice guy. As time went on though, I learned Mike was a caveman. He (skip this part if you’re easily offended) ate his food like a farm animal, dug around in his nose (in front of me), picked his feet in public and spit in the frying pan to see if it was hot enough to prepare dinner in. Looking back I see that sloppy kissing, in this case at least, equated to questionable grooming and kitchen practices.

I was crazy about this guy who was exceptionally stingy with affection. I’m exactly the opposite. I’m forever kissing and hugging my kids, my friends and my guy. It’s like I think the world is one big teddy bear. Drive-by kissing man only kissed me as a means to an end. He never kissed me hello, goodbye or just because. He viewed it as a necessary part of getting laid. I later realized he was a self-absorbed cheat. It made sense looking back that he wouldn’t go out of his way to increase the bond between us or allow himself to get too close. That would mean caring about someone more than himself and being loyal. He was a drive-by kisser, and as it turned out, a drive-by boyfriend.

On the other side of the drive-by kisser is the demanding kisser. This guy isn’t a bad kisser — he’s just an emotional vacuum. I already confessed to being an affectionate person, but even my love-all-people nature wasn’t enough for him. He needed constant affection, and as it turned out, constant attention. He even chastised me one day for not kissing him goodbye on my way out early in the morning (it was his first morning to sleep in after working for days straight — I thought I was being considerate by leaving him alone). I dumped him before he sucked all the moisture out of my lips and the life out of my soul.

These kinds of kissers are my favorite and I’ve been fortunate to have a couple. One was a strapping young blonde-haired, blue-eyed Christian boy/construction worker who was so sex-deprived that he kissed me like I was a sex goddess. He’d pull away to stare at me, tugged the hair at the base of my neck carefully, and was extremely talented with his teeth and tongue. Every time we made out, he acted like it was our last night on earth together. I could practically hear “Crash Into Me” playing in the background. I loved that boy, but he dumped me (I assume) because I was older than he and not quite as devout in my religious practices. (I tried to jump his bones every time I saw him.) I can say without hesitation I would have married him if he had asked, even though it would have been a disaster, just to have a full access pass to his mouth.

My most vengeful act against my ex

When is it OK to go to dinner with a married man?
Uh-oh. My ex’s girlfriend wants to be my friend