A new poll found that one in seven people say they settled for their long-term partners even though they’re not the “love of their lives.” Talk about ouch.

We all have that one person in our lives — you know, “the guy that got away” — but eventually we move on and find someone else who makes us happy. Or, at least some of us do. A recent survey by Siemens Festival Nights found that one in seven people are in a long-term relationship with someone they don’t consider to be the “love of their life.” 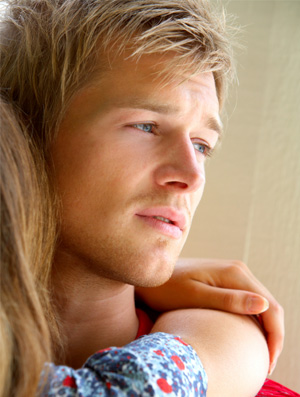 The 2,000-person survey also found that 73 percent of those settled for others because they missed out on the person they thought was their soul mate. And, in a heartwarming aside, 46 percent would leave their partners to be with their “true love” if given the opportunity.

Ouch, talk about a painful revelation — especially if you’re on the losing end of the equation.

Not sure how your partner really feels? We asked dating expert Rachel DeAlto to give us a few tips to figuring out his true intentions.

“Understand the fantasy of ‘the one that got away.’ We all have regrets as to past relationships. The would-have, should-have, could-have moments,” DeAlto said. “However, like most any situation, we create a fantasy version of the past — ignoring the problems and focusing on the positive moments only. It might not be the best consolation, but understand that your partner’s idealized version of that prior relationship isn’t likely accurate.”

It’s OK for your partner to like his ex, DeAlto continued.

“Do they still talk about their ex in passing? Is it an occasional, ‘I hope she is happy and well’? That is fine, if not healthy. Animosity isn’t necessary,” she said. “Understand that if it isn’t a constant topic of conversation and your needs are being met, they have likely moved on.”

The ex shouldn’t be a part of your daily conversations, though.

“Pay attention to unfair comparisons. Is their past partner put up on a pedestal? Are you constantly being compared to how they were? Are you always the one that is made to feel like you don’t live up? These are huge red flags that the torch for their ex is still burning bright,” DeAlto said. “Part of a healthy relationship is security, and being put in such a position will never lead to feeling secure. Let them go.”

Have you ever been in this sort of dating situation? How did you handle it? Sound off below!

Who pays on a date? Anna Kendrick gives the answer
Bracelets that broadcast your single status are a thing
8 Signs you’re in a dangerous relationship