It’s hard to believe, but Blue Ivy Carter is 1. Oh, how we’d love to be a guest at her super-luxe birthday bash. 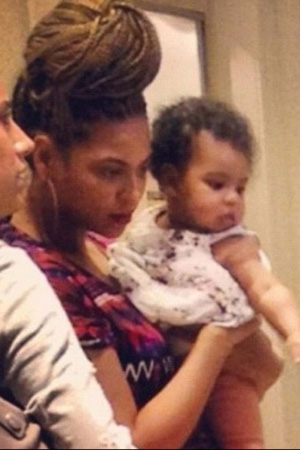 That’s right: The first daughter of hip-hop is celebrating her first birthday today. It’s hard to believe it’s been about 18 months since Beyoncé announced her pregnancy to the world with a red-carpet announcement at the MTV Video Music Awards.

“I want you to feel the love growing inside of me,” she told the audience before launching into her song “Love on Top.”

Since then, we’ve heard a ton of rumors about the Carter family, including that they’re part of the Illuminati and that Blue Ivy was named for Jay-Z’s ex.

What we do know? Blue Ivy is one adorable — and lucky — baby.

“We welcome you to share our joy,” the pair wrote on Beyoncé’s Tumblr blog along with the first photos of the newborn. “Thank you for respecting our privacy during this beautiful time in our lives. The Carter Family.”

And Beyoncé is a natural at parenting.

“I love changing diapers,” the singer told Anderson Cooper last summer. “I love every moment of it. It’s so beautiful.”

It’s changed her priorities, she said.

“It just gives you purpose and all of the things my self-esteem was associated with, it’s all completely different,” she added.

“I realized why I was born and more than anything, all of the things I want to pass on to my child. The best way of doing that is not by preaching or telling her, but showing her by example, which is one of the reasons I’m here.”

No word on how the beautiful toddler is celebrating her birthday, but we’re going to assume it’s at daddy Jay’s $1 million suite at the Barclay’s Center.