We talked to real couples who thought long and hard about how many kids to have, and the reasoning behind their decision. Maybe their insight will help you decide, too. 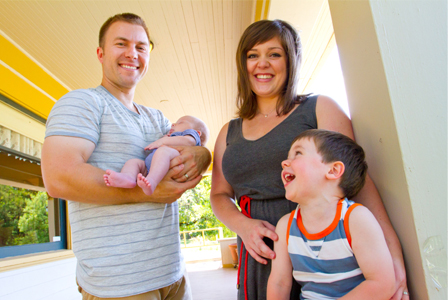 No kids for us!

“My husband and I have been married for 13 years, and we don’t have any kids. Since we’re both 40, it’s probably not going to happen. We’ve talked about it, but just never felt compelled enough to ‘take the plunge.’ Most of all, we have a beautiful life that we both love. Also, we have a lot of kiddos in our world. If we need a ‘kid fix,’ it’s never far from our reach! And we get to go back to our ‘normal’ life afterward! It’s the best of all worlds, in our opinion.” — Christy N.

“I chose not to have kids because I grew up in ideal conditions (large house, enormous yard, several pets, tropical climate, beach nearby) and due to circumstances, we currently live in relative poverty (in a small apartment in a high crime area with roommates). We decided we would only have children if we could give them what they deserve — trees to fall out of, dogs to play with, a safe neighborhood to play in. Kids are not to make your life better — you should make their life better than yours was. Since we can’t give 100 percent of what they deserve, it’s our choice not to have any kids.” — David D.

One is just enough

“I don’t even have enough brainpower to focus on my 14-month-old daughter, let alone do the dishes and pay attention to my husband. With one, there are so many advantages: They are only whiny for a short period of time; they don’t have to learn to share; they can play all day at day care or school with other kids and come home to a peaceful space; they are forced to use their imaginations; they learn to converse with adults; they get more attention and yet less… and they are often talked to in a more mature manner.” — Rea F.

“I had always wanted two kids but after having my daughter who had ADHD and behavioral problems, experiencing the difficulties of a ‘problem child’ became too much. I decided not to have any more children. Another reason was the financial side of raising children. It costs a lot of money to raise kids!” — Natasha C.

Two or three is plenty

“Originally, I wanted four kids, but after having one, I felt like two was our number. Kids are a lot of work, more than I ever could have imagined, and are also quite expensive. Plus, two is perfect because they can grow up as friends, and will always have each other should anything happen to me or my husband.” — Sarah C.

“When I was pregnant with my second child, part of me hoped it would be another girl because then I knew I could talk my husband into trying for a boy and we could have three. The other part was relieved when I found out we were having a boy because something about having one of each made me feel like our family was complete. Also they wouldn’t outnumber us. One for each hand. Done.” — Jessica G.

Four or five is the limit

“I’ve always been a kid at heart, and wanted to pass that joy along to someone else. A loud, active, bustling house is what I always envisioned — where’s the joy in a quiet, boring household? Three was too few, and five was too many, so we settled on four.” — Jason P.

“Originally we had just wanted two kids, a boy and a girl (doesn’t everyone say that?). But, our first four kids ended up being girls, and my husband still really wanted a son to carry on our last name. Guess fifth time’s the charm!” — Rita B.

“My wife and I have five children, ages 8, 6, 5, 4 and 2. Our sixth will arrive in a month. Having a family of any size is not easy, but nothing of lasting value is. Children are not trophies or items in a collection. Each is an individual with whom you have a once-in-a-lifetime opportunity to build lasting, deep and eternal relationships. Who wouldn’t want as much of that as you can possibly get?” — Aaron T.

“When I met my husband, he told me he wanted six kids. In my naivety, I agreed with the stipulation that each child would get their own bedroom. He wanted six because he’s the youngest of five and wanted an even number. He also wanted them close in age so they could grow up being friends. I’m an only child and didn’t want my kids to have to grow up alone.” — Shannon B.

“A perfect number is not the goal… it’s what you do with what you have.”

More about having kids

Real women who say no to kids
Does your only child need a sibling?
Why it’s OK to love your husband more than your kids