A new study from researchers at Columbia University and Princeton University found a troubling link between a child’s soda consumption and aggression. 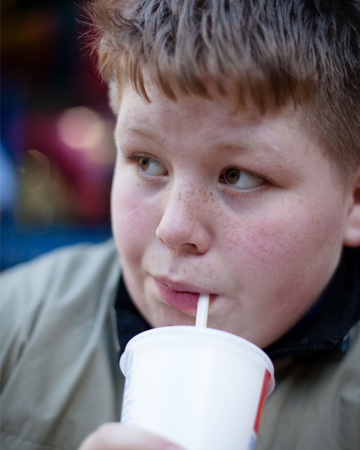 Soda continues to be one of the most popular drinks among children, despite the risks it has for their dental and cardiovascular health. However, a new study published in the Journal of Pediatrics might finally entice some parents to bar their child from consuming the fizzy drinks for good.

Researchers from Columbia and Princeton universities analyzed data from 2,929 mother-child pairs and found that 43 percent of the children surveyed consumed at least one serving of soda a day. Four percent of children drank four or more servings a day.

Data also showed that the more soda children drank, the more they exhibited signs of aggression and withdrawal. For example, children who drank four or more servings of soda were twice as likely to destroy things or get into fights than children who didn’t drink any soda.

The data were pretty consistent among all children, even after researchers adjusted the findings for variable influences like socioeconomic status, maternal depression and domestic violence.

“That was pretty striking to us,” said Shakira Suglia, Columbia University epidemiologist and study researcher.

However, researchers are careful to warn that the data don’t prove that soda causes children to be violent or aggressive.

“It’s possible there’s something else associated with child behavior and soda consumption that we just didn’t account for,” Suglia added. “The study should be interpreted with caution.”

Physicians have long preached to limit the amount of sugar and caffeine children consume because these substances affect chemical processes in the body.

“[These foods] can trigger the release of regulatory counter ‘stress’ hormones like adrenaline and cortisol. These are the ‘fight or flight’ hormones that make us fidgety, irritable and anxious — certainly not something that we want to occur in our young children who are already rambunctious by nature,” Dr. Ann Kulze, M.D., of www.dranns10steps.com, told SheKnows.

That’s not to say children can’t drink a soda every now and then, but it should be a once-in-a-while thing, not an everyday thing.

“In terms of caffeine intake for children, a safe bet is to limit your children to 45 milligrams per day, an equivalent of a 12-ounce soda,” Cyrus Schwartz, father of three and president of Mountainside Farms and ZenSoy, told SheKnows.

I Wish Someone Warned Me About Awful Postpartum Periods

16 hrs ago
by Jenna Farmer

21 hrs ago
by Laura Bogart