Selena Gomez was spotted out and about at some Grammy Awards after-parties on the arm of a mystery man. Is this the guy helping her move on from Justin Bieber? Not so fast… 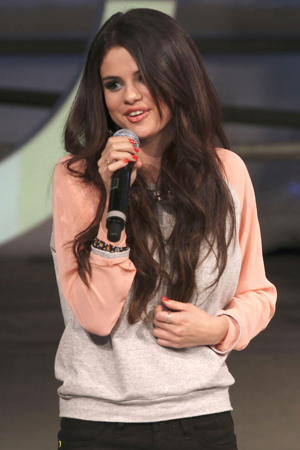 Selena Gomez didn’t attend the 2013 Grammy Awards at the Staples Center in Los Angeles, but that didn’t stop her from hitting a few of the after-parties. The 21-year-old singer and actress was spotted at the Warner Music Group/In Style after-party at the Chateau Marmont, walking arm in arm with a mystery dude.

Has she already moved on from on-again, off-again boyfriend Justin Bieber to another dude? Nope. Sources say the guy is actually JB’s good pal Alfredo Flores, and he was there to help the 18-year-old Bieber woo his lady back.

“Justin has tried to make it seem like Selena is begging him to get him back but it’s just not true,” a source told HollywoodLife.com. “On the real, he’s desperate.”

“That’s why Alfredo went out with her after the Grammys, to try and keep the peace and convince her that he’s a good guy,” the source continued. “Justin knows he’s f****d up and is picking up the pieces.”

Or, you know, he could just pick up the phone and apologize to his ex? Just a thought.

More than likely, Flores was just there to escort Gomez in a friendly way. As for what The Biebs was doing that night, he tried to do a live concert via webcam, but the onslaught of fans crashed the site. Then, he moved on to making fun of The Black Keys’ drummer, Patrick Carney.

“The black keys drummer should be slapped around haha,” he tweeted.

Seems pretty out of left field, right? Well, Carney apparently started it by saying that Bieber didn’t deserve to be at the Grammys. If you recall, JB was all upset that he wasn’t nominated for an award because he thought he “deserved” one.

“He’s rich, right? Grammys are for, like, music, not for money,” Carney reportedly said. “He’s making a lot of money. He should be happy.”

We’d be happy with the money, so we’re on Carney’s side on this one.

21 hrs ago
by Hannah Rimm

21 hrs ago
by Nadine Avola

23 hrs ago
by Michele Borboa MS