If you like romance, you’ll love these engagement stories. These guys wanted to show their girls just how in love they really were with a public declaration and an offer they couldn’t refuse, all in celebration of Valentine’s Day. 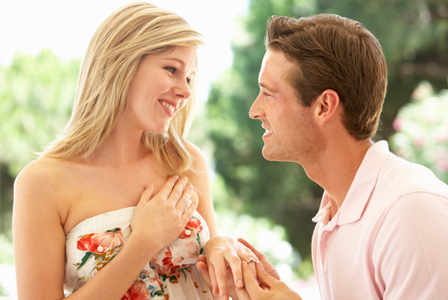 Every marriage starts with an engagement, that exciting moment when a couple can officially begin to plan a lifetime together. It’s always fun to hear about some of the crazy and creative lengths a guy will go to planning an unforgettable proposal. So what is the most popular day to get engaged?

Coming in at number three… New Year’s Day. So, what day tops the list? Christmas is the obvious answer, but Valentine’s Day is nipping at its heels. We’ve rounded up some Valentine’s engagement stories that could swell even the Grinch’s heart.

You never know when you might need a friend to help you out. Stefan Libon of Australia went in cahoots with his good friend Christine O’Malley to surprise his longtime girlfriend. Stefan brought Jess McGarrity down to the dock for what she thought was a meeting with Stefan’s visiting cousin. Little did she know that the Queen Mary II would be pulling into the harbor with a billboard just for her. Christine, who does publicity for the Queen Mary, arranged to have a 25 meter-long banner posted on the side of the ship that read, “Marry me, Jess?”

It’s pretty common for talk shows to do a Valentine’s Day theme on Valentine’s Day, and The Talk was no exception. They invited 50 couples on stage to share their love. The crowd included a soldier and his girl who had to miss the previous Valentine’s together because of his deployment. One guy told his story about how his shyness almost stopped the relationship from even happening. Host Julie Chen put out the question if any of the guys wanted to get engaged… and 50 fellas dropped to one knee with a ring in hand. This was followed by lots of crying, kissing and whooping from the audience.

Romance is in the air

We’ve all heard of “the mile-high club,” and as it turns out, there are other acts of love that are pretty popular on airplanes. We’re talking about proposals. On a 2012 Valentine’s Day Italian flight to Milan, the flight crew had a few extra announcements. Requesting that trays be in the upright and locked position was followed by a request for a lifetime of love. One lucky girl’s plans for a ho-hum couple of hours playing Sudoku were pleasantly interrupted when her guy dropped to one knee as an attendant announced the proposal. They popped a bottle of bubbly to celebrate.

30 mins ago
by Meredith Goldberg

33 mins ago
by Meredith Goldberg

3 hrs ago
by Kelly Iverson

3 hrs ago
by Dr. Claire McLintock