What happens when you abandon a perfectly good man for a bit more excitement in your life? Wendy Walsh, Ph.D., comments on the growing trend. 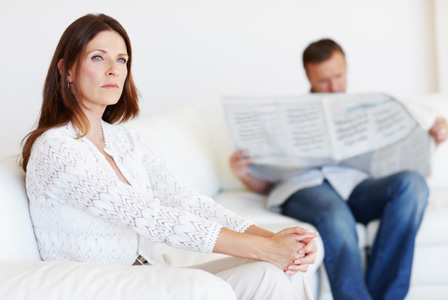 I recently had a family dinner with a friend who told me she is getting divorced. This wasn’t a shock to me. For two years she has looked at the lives of her single mother friends through rose-colored glasses. While her own husband of 17 years managed the finances, participated equally in child-raising, helped build a business with her and take care of the amazing trophy house they had lovingly built together, she socialized with single mothers and lapped up stories about men and dating, selectively ignoring the tears of heartbreak and zeroing in on the fantasy of hotel-room rendezvous. Now she is abandoning her children for 50 percent of their lives and leaving a perfectly good enough marriage because she wants to have “physical intimacy” and be “in love” (her words).

There are reasons to get divorced. Sadly, toxic relationships are dangerous to children. Marriages traumatized by violence, emotional abuse and alcohol and drug addiction should cease to exist in the name of the children involved.

But this wasn’t one of those marriages. This was a marriage, like so many long-term American marriages, where things got a bit damp — each other’s pheromones began to smell like a brother or sister, romance was replaced by family to-do lists and daily life became so safe, so predictable and so familiar that the word “boring” came to mind. Add to that mundane cocktail, a dose of menopause depressive hormones, an urge for a dopamine rush, all the sexual opportunity of a high-supply sexual economy, and well, some married folks start to feel like they are missing out on something.

Now I know you are going to tell me you can never know what goes on in someone else’s marriage. It could be an awful place for her. I agree. Maybe it is. Maybe her problem is that she can’t disclose her emotional pain to her closest friends. But she seems not to have been able to disclose it to her husband either. He is, in fact, one of the kindest men I know — a good communicator and emotionally available — and now he is devastated. Her morose boys sulked through our dinner, retreating to video games soon after the food while my friend distracted herself by focusing on two new single mothers who she had perhaps tagged as future bar-pals.

Of course there are ways to accept mature companionate love or even ignite a sexual spark in an old bed — but it means work. And many people would rather sell a big house, damage their children and toss a marriage than do the work of getting through a bumpy or a boring period in a relationship.

I know that if you are reading this, you, like me, will cast your own opinion weighted with your previous experience. Some of you will recite the old mantra, “A happy mom makes happy children. If she doesn’t make herself happy, then her kids aren’t going to be happy.” True. But, that saying has also served as a wonderful justification for some darn selfish acts — people who put their sexual “needs” above their children’s security and stability, for instance. Would you have a different opinion if this were a man? I might remind you, there are ways to find excitement and happiness without a new bedmate.

You might say that I am only privy to the public personalities of both parties and that the relationship may be suffering from more than dents and dings and truly be in triage. Again, I say, true. But the best gift she can give her children is to model healthy repair skills. Our children will never learn how to repair a relationship unless we let them peek under the hood a bit and watch the handiwork. We must model love and commitment if that is what we want our children to experience.

Finally, you might feel sad and bitter like me. I’m a single mother who knows a good deal when she sees it. I have half a mind to engender that husband and pick up the pieces of her family myself. But somehow, that would be immoral too.

Instead I sit and blame our highly sexualized media where perfectly good enough married people watch Snooki in a hot tub, contestants on The Bachelor offer artificial love and sitcoms with enough bed hopping to make it a national pastime. Where are the shows that support families? Here’s a sad game: Choose one TV dad that you’d like to have. I ask you, how can married people survive this cultural assault? My friend obviously couldn’t.

Wendy Walsh, Ph.D., appears on CNN as a human behavior expert, writes a column for DatingAdvice.com and hosts Happily Never After on Investigation Discovery Network. Her forthcoming book, The 30-Day Love Detox, is available at your favorite online bookseller.

3 Reasons being single rocks
3 Dating resolutions for the New Year
Must-know dating signals: Is your date into your date?

4 hrs ago
by Katie Smith