What a way to end 2013: Kim Kardashian is pregnant! See how her family and friends are reacting to the news. 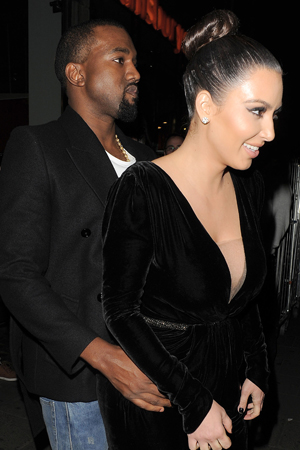 Kim Kardashian couldn’t let 2012 end without a big announcement: She’s pregnant! The baby daddy — AKA Kanye West — made the announcement during a concert in Atlantic City, New Jersey, on Sunday night.

“Stop the music and make noise for my baby mama,” West told the crowd through a huge grin. Global Grind also has a shot of Kardashian and mother Kris Jenner embracing after the announcement.

Kardashian hasn’t said anything about her with-child status (yet). But her family is thrilled, judging from their reaction on Twitter.

“Keeping secrets is hard with so many family members! Especially when you are so freaking excited!!!!! LOVE is everything!!!!” she tweeted.

“Been wanting to shout from the rooftops with joy and now I can! Another angel to welcome to our family. Overwhelmed with excitement!” the mom of two added.

“I’m excited for Kanye and my sister! There’s nothing like bringing life into this world! Let’s keep Gods blessings coming!” Khloe’s husband tweeted.

Not everyone shares their excitement, though. Other Twitter users were quick to add their spin on the news.

“Most pregnancies last about nine months, or about four marriages in Kim time,” tweeted the account for E!’s show The Soup.

“Is there a tape of the conception for sale yet?” another tweeted.

“Kanye West just announced onstage that Kim Kardashian is pregnant. I don’t even need a prophecy to tell me this kid has to be destroyed,” added another.

Kardashian is reportedly about three months along, meaning we’ll be hearing about the pregnancy — and the baby — for much of 2013.

Image courtesy of Will Alexander/WENN.com

14 hrs ago
by Meagan Morris

18 hrs ago
by Kelly Iverson