While you’re being wined, dined and wooed this spring, don’t forget to consider some topics that DO really matter. Most importantly, says author and financial advisor Leslie Greenman, find out if he has a healthy, balanced approach to money. 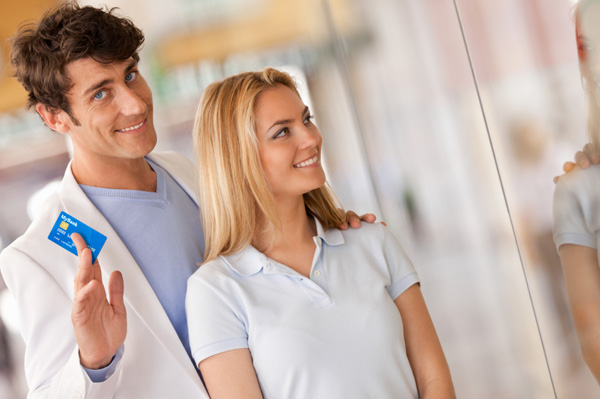 It’s spring — the birds are chirping, the sun is shining and romance is in the air.

As much as we’d love to tell ourselves otherwise, good looks and a winning personality aren’t all that matter. The blunt reality is that money is the #1 cause of divorce in the U.S. And when it comes to matters of not just the heart but money as well, there’s no better time than a first date to find out if your new guy cuts the proverbial mustard! After all, notes Leslie Greenman, you don’t want to become emotionally involved with someone who doesn’t have the same approach to money as you do.

“Dating is all about learning, and one of the most important things you need to know is if your date is good with his money,” says Greenman, a financial advisor and author of the new book Dating Our Money: A Women’s Guide to Confidence with Money & Men (AuthorHouse, 2011). “While the first flush of romance can be a head-spinning experience, make sure you do your homework prior to giving your heart away. Forget about anyone who won’t meet you halfway with a healthy approach to money. Make sure he is getting on the right track if he hasn’t been before, and keep an eye out for telltale signs of slip-ups.”

So how do you find out whether your guy is money conscious, and better yet, how do you do so gracefully so early in the relationship?

Have cash with you on the date so when it is time to pay, you can offer to cover your half with cash. While you’re offering to pay, mention to him that you don’t like to use credit cards and wait to see how he responds. You might be surprised at how he reacts.

“A date once told me that he wished his ex-wife had had the same philosophy with credit cards,” says Greenman. “He told me she racked up $70,000 in credit card debt — money he was left paying back. That was a huge surprise! But it opened the door for me to find out more from him about his financial health without having to ask point blank.”

Check out his wheels

Is your date driving a flashy sports car, but you know he’s in the first job of his career? Is he driving a more modest set of wheels but you know he’s in a leadership position at work? The type of car he drives when taken into consideration with his career can be an indicator of how he spends and budgets his money. It might also indicate that he turns to material objects for fulfillment.

“We all hope at some point for a fairy tale complete with Prince Charming whisking us away in his carriage,” says Greenman. “Remember, though, you’re not marrying the guy’s sports car, and you certainly don’t want to wind up in a situation where you’re paying for it if he can’t.”

Ask about his relationship with his family

“While he might not necessarily still follow the money values and habits his parents raised him with, finding out about his parents is a great way to learn what his initial lessons about money entailed,” notes Greenman. “And naturally, awkward though it may be, finding out if he’s carrying around any financial baggage from a past relationship is a must. Remember, though, that if he is, that doesn’t mean you have to give him the boot. It’s all about finding out if he approaches those financial bumps in the road in a fiscally responsible way.”

Find out if he is reluctant to discuss difficult subjects

The best approach might be to ask him about his past relationships. Did they end well? Does he still talk with any of his exes? If he is very reluctant to talk about his relationships, it could be a red flag that he won’t be able to communicate about difficult decisions if you’re in a relationship.

“Communicating, listening and sharing are integral parts of a successful partnership,” advises Greenman. “Make sure this guy knows how to not only share his thoughts but also to listen to yours. Life is full of decisions and ups and downs — how has he handled his own past issues?”

Check out his phone

On average, people spend $150 on phone apps per year, but some people have bills as high as $900 per year. Is that a luxury you feel comfortable with? “Check out your date’s phone,” recommends Greenman. “Is it the latest, greatest smartphone model? Ask him what his favorite app is and whether he gets only free ones. If it appears he spends a lot of money each month on something as trivial as phone apps, consider how he might spend money in other areas. On the other hand, if he has an app that helps him manage his monthly budget, that’s probably a good sign!”

With all of the information available online, you can find out a lot about someone with a quick search. For example, you can check if a person has paid their property taxes by searching online public records.

“It may seem like playing a game of I Spy, but if you are going to give your heart to someone, and commit to a lifelong partnership, at the very least you need to be able to trust them,” says Greenman. “Before you even go on that first date, you might want to do some research. If you find a record online of his eight counts of tax evasion, go ahead and cancel your evening out!”

Has he posted a lot about expensive clothes or gadgets that he’s bought? Or about being low on money? Are the pictures he has posted of him with other people or with his stuff?

“Facebook is a great way to find out about your date’s life without ever having to ask an awkward question about money,” notes Greenman. “You want to be romantically involved with someone who not only has the time, but makes the time, to be with you and share your life. If this guy can only post pictures of himself on his Facebook page, or if he is constantly bragging about all the latest stuff he’s bought, picture a big red flag. It could be an indicator that either A) he’s overspending on unimportant items or B) he thinks he can use money to impress people or buy their love.”

Think about your deal breakers

“If your date has only one or two of these faults, you might still want to give him a chance and that’s OK,” notes Greenman. “Be clear about your own goals and expectations and stick to those when you’re deciding on whether you should go on a second date.”

“Real love is about forming a partnership between two people who care enough about one another to make responsible decisions in all aspects of life, including finances,” says Greenman. “Forget about getting swept away until you make sure you won’t get tossed overboard or financially sunk in the process! When you’re confident that you’ve found someone who is as financially aware as you are, you can develop other aspects of the relationship with less anxiety.”

More on money and dating

Money dos and don’ts for dating
Surprise money and dating stats from Match.com
Woman loses $200,000 to a con man on a Mormon dating site