Shakira reveals how she bounced back after giving birth to son Milan earlier this year. 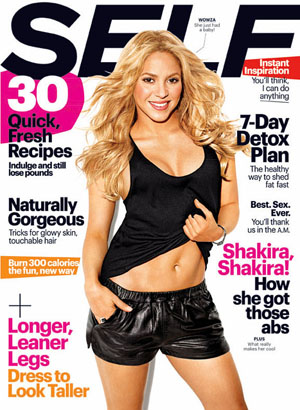 Shakira is the cover girl for this month’s issue of Self — and the new mom of Milan looks amazing. However, she didn’t feel that way right after giving birth.

“After the delivery, you look like a shar-pei!” the Colombia native joked to the magazine.

We’re not so sure we believe that, though. The “Hips Don’t Lie” singer flaunts her flat abs on the magazine’s cover. She had a little bit of a head start on her workouts, though.

“I did Zumba throughout my pregnancy,” she said, adding pliés with “glute squeezes” to the routine whenever possible.

The most important part of her post-pregnancy routine was her diet, though. The singer told Self that she eats eight small meals of 200–250 calories a day. We love that Shakira isn’t on a very-low-calorie diet, but we wondered if that’s still enough food for a nursing mother. We asked J.J. Virgin, nutritionist and author of The Virgin Diet, to weigh in on Shakira’s post-baby diet. Are such small meals really enough?

“It really depends on the number of mini meals she eats throughout the day to determine whether she’s getting optimal calories,” Virgin tells SheKnows. “I’m a fan of three meals rather than mini meals throughout the day. Every time you eat, you raise insulin, which stores fat, which could be a disaster if you want to get that baby weight off.”

“I’m happy to hear she’s eating protein and fiber, which indeed do fill you up,” Virgin continues. “Good, too, [that] she’s taking fish oil. I recommend she incorporate other healthy fats into her diet, including avocado, nuts and seeds, and coconut milk.”

So, it sounds like Shakira has her diet on lock, but what about other new moms who are struggling with their post-baby diets? Virgin says it’s important to focus on quality foods without worrying too much about the quantity of calories.

“Every meal should be lean protein, healthy fats, leafy and cruciferous veggies and slow-release, high-fiber carbs like sweet potatoes and legumes,” Virgin says. “If she still needs additional calories and she’s doing meals correctly, she can snack on, say, almond butter and apple slices.”

“I’m a fan of protein shakes for breakfast with plant-based (but not soy) protein, unsweetened coconut milk, frozen berries and kale,” Virgin adds.

“All together, that’s the formula for the perfect post-pregnancy body,” Virgin says.

Well, that and a good attitude, which Shakira definitely has.

“I don’t obsess over my flaws, because I see my body as a whole,” Shakira told the magazine. “Besides, I think men appreciate confidence more than perfection.”

More on diet and fitness