If your little one seems to have the blues, some experts say it could be depression. Learn how to tell if your child needs help. 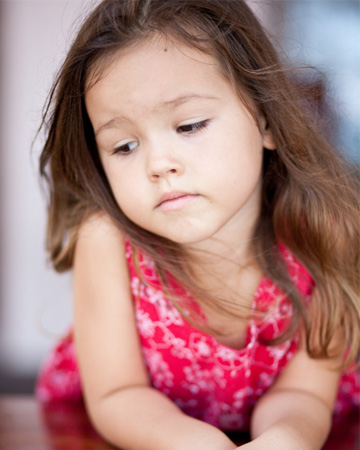 Preschoolers can go through a range of emotions — sometimes quicker than the blink of an eye, it seems. When you suspect that the feeling goes from sadness to depression, however, it may time to step in.

According to a recent study from the Washington University School of Medicine in St. Louis, the brain structure that manages emotions does not work the same for depressed kids as it does for children who are not depressed.

Researchers studied 54 kids between the ages of 4 and 6; 23 of them had been diagnosed with depression before the study commenced. Using a functional magnetic resonance imaging (fMRI) scanner, researchers showed the children photographs of people with faces conveying different emotions — and some with no expressions. The depressed children experienced more amygdala activity upon seeing the images than the healthier children did.

“The brain at such a young age is not exposed to the hormones that a teenager is, nor the complex guilt feelings of an adult, and although more supple and capable of adjusting to injury, depression denotes something more complex and serious,” said Dr. Gopal Chopra, a neurosurgeon and co-founder of PINGMD.

Dr. Deborah Serani, author of Depression and Your Child: A Guide for Parents and Caregivers, said young children have brains that are still developing. “In this regard, they process depression as an ‘I’m bad’ instead of the adult’s more matured brain, which often experiences depression as a despair or sadness,” Serani said.

Eileen Kennedy-Moore, a clinical psychologist and co-author of Smart Parenting for Smart Kids, says that preschoolers can show symptoms of depression, but whether they can have a full major depressive disorder is controversial. Some symptoms include irritability not just sadness, she adds.

Dr. Judi Cinéas, a social worker, said a change in behavior is the best indicator that an issue could be brewing. Some kids seem withdrawn, and others may regress to behaviors from younger days, such as bed-wetting. The child may become more attached to the parents as well. (In older children, aggression is more common.)

Children may also report physical ailments. “In depression, your body does feel some of the pain, and children are likely to experience the physical symptoms,” Cinéas said. “The other side of it is that they know how to express physical hurts better than emotional ones.”

Is depression triggered or genetic?

Sometimes there can be a history of depression, but children can become depressed even if it doesn’t “run in the family.”

A trigger could drive depression, and a loss is the most regular trigger that Cinéas sees. “Loss can be the result of a death… death in the family, death of a friend or pet,” she said, noting that other losses can include moving away from friends, being bullied or going through a natural disaster.

“You can never know which even will be the one that will affect which kids. This is why it is important to know your children; that way you can notice the difference in them,” she said.

Kennedy-Moore says helping a depressed child develop skills to manage his or her emotions can be helpful — there is no standard treatment.

“Working directly with children this young requires a play-based approach as well as close collaboration with parents. Because parents play such a large role in the lives of preschoolers, and because preschoolers’ abilities to discuss and remember are limited, the most effective therapeutic approach may involve helping parents to help their children,” she said.

Research on emotional coaching suggests that parents can assist a child by acknowledging his or her feelings, and then helping the child cope with those feelings.

Most parents still have one pressing question when it comes to dealing with a child’s depression: When should they seek professional help?

“Once the change starts to go beyond that one- or two-week period, reach out to school counselors, doctors and other professionals,” Cinéas said.

“Waiting too long means allowing the child to suffer longer and the disease to get stronger,” she added. “The moment your gut tells you something is wrong, get help.”

Is childhood depression caused by technology?
1 in 5 kids have a mental disorder
Beyond the blues: Kids and depression