A new study shows our ability to turn down high-calorie and high-fat foods is severely inhibited when we’re low on sleep. 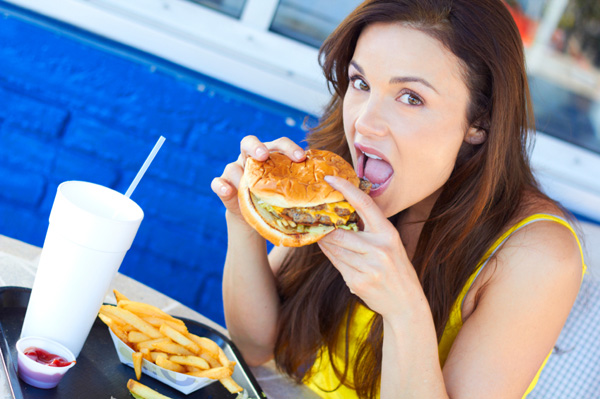 We’ve long heard that there is a connection between the amount of sleep we get each night and the size of our waistlines. Researchers used to believe that people eat more to make up for the energy they lose from sleep deprivation.

However, a new study co-authored by Dr. Matthew P. Walker, a professor of psychology and neuroscience at the University of California, Berkeley, suggests that a lack of sleep actually affects the parts of the brain that control our hunger motivation and the ability to make rational decisions.

For the study, Dr. Walker and his colleagues assigned 23 healthy women and men to two different schedules. On one schedule, the participants came into the lab and slept for eight hours before eating a small breakfast. The participants were then asked to look at 80 different pictures of food and rate how strongly they wanted the food while researchers measured their brain activity. They were also told that they would be able to eat the food they rated the highest.

The participants followed the same schedule during the next visit, but they were kept awake during the night and fed snacks like apples and peanut butter crackers.

The results? The participants were much more likely to choose high-calorie foods — like potato chips and chocolate — when they were sleep deprived. Brain scans showed the high-calorie foods produced “intense” activity in the amygdala — the part of the brain that regulates desire for things, including food. At the same time, activity in the cortical parts of the frontal lobe slowed dramatically, allowing the amygdala to essentially “take control” of the food decision-making process.

“Their hunger was no different when they were sleep deprived and when they had a normal night of sleep,” Dr. Walker said in the study, published in the journal Nature Communications. “That’s important because it suggests that the changes we’re seeing are caused by sleep deprivation itself, rather than simply being perhaps more metabolically impaired when you’re sleep deprived.”

How to get more sleep (and save your waistline)

So, fatty foods are like our Kryptonite when we’re tired. The only way to stop their control over our minds? Get more sleep.

Easier said than done. In a perfect world, we’d all get eight hours every night. However, that’s rarely possible in today’s go, go, go world. This study shows that it’s vital we try to work more sleep into our routines. But how? Dr. David O. Volpi, M.D., recently gave SheKnows a few tips on how we can settle down and get in more snoozes.

More on diet and nutrition

10 hrs ago
by Theresa Prenger