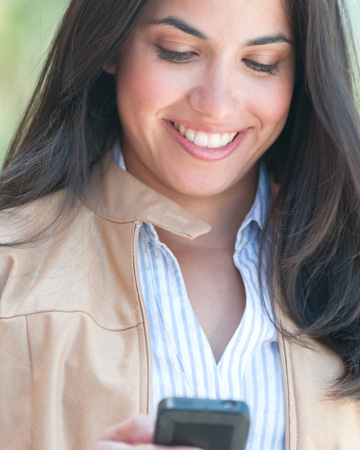 Allow me to paint a picture for you, please. You met a new guy (online, at the bar, via a mutual friend, etc.) and you’ve talked to him on the phone or in person just a handful of times. Because you’ve planned your date for early next week, there are a few days to go before you get to see him again.

In today’s tech-infused world, the majority of people in this situation will more than likely carry on texting back and forth instead of a) calling each other or b) waiting it out until the date.

But by communicating through text messages with your potential date — or current partner — you are literally having a textual relationship with them. You’re giving them an identity and a personality without actually knowing them, thereby creating someone who doesn’t exist and setting unrealistic expectations. Intonation is everything. Interpersonal communication is key.

The problem with texting is that both parties perceive each text as actual “speak” and give their own personal intonation and inference on the sentences. You probably know from your own experiences with friends and relatives that sometimes your tone is misread through texts and hard feelings can arise if the air is not cleared. It has certainly happened to me. “I’m sorry! You read my text the wrong way. I didn’t mean it like that!” If things like this happen when you already know someone very well, imagine the misinterpretations that happen with a complete stranger. Text messages are no good at conveying human emotions. And guess what? That smiley emoticon is no match for hearing actual laughter.

Recently, 40-year-old single mother Sanya Hudson-Payne had to break off a relationship because of the pitfalls of texting. “At the end of the day, I want to hear my man tell me he loves me when he says it for the first time,” she says. “I want to relish in the inflection of his tone as he professes those three words every woman loves to hear. Instead, he texted it to me. Even after I told him that I’d prefer that and other serious topics be talked about in person, he continued to text me to convey his love, anytime he wanted to apologize, talk dirty and… get this… discuss how he was thinking about marriage.”

Relationship expert Sujeiry Gonzalez supports these thoughts, as well. “The art of communication is about much more than words, and includes gestures and vocal inflictions,” she says. “Without an actual conversation, you aren’t really communicating effectively. She also touches on the notion that texting someone shows very little effort. How special can a woman really feel if a man only texts her?

Here are some tips to keep texting from ruining your relationship from marriage therapist Dr. Vondie Lozano:

How soon is too soon for sex?
Are you dating a Don Draper?
Tech in the bedroom: Dos and don’ts

16 hrs ago
by Suzannah Weiss

18 hrs ago
by Amanda Ogle

22 hrs ago
by Amanda Ogle