Sure, tips on what you “should” be doing to make your relationship work are helpful, but what about what you shouldn’t be doing, like ever? We’ve got the scoop on what to avoid. 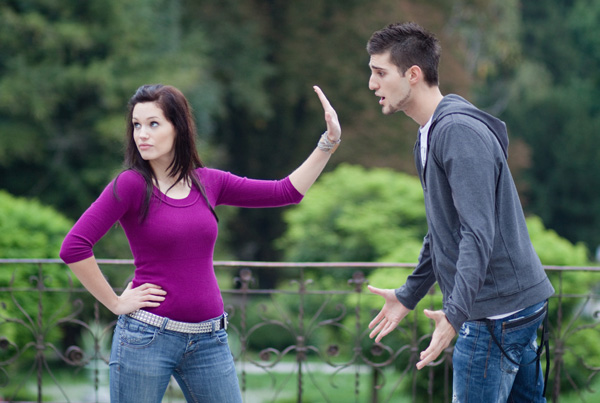 Not giving him any say (AKA being the boss of him)

While taking charge isn’t a bad thing, wanting to do it all the time when it comes to your relationship can drive your poor guy crazy. He wants a girlfriend or wife, not a boss (he has one of those at work.). If you want to really screw things up, make him feel like he doesn’t get any say, that you’re the only one who wears the pants (so to speak) in the relationship. The right thing to do is maintain a balance, where both parties get a say and everything is democratic — not a “your way or the highway” situation.

We all have things that bother us about the people in our lives and some of them are worth bringing up, but if you’re nagging your guy about every little thing he does or doesn’t do, at some point he’s going to crack — and then there might be no turning back. Rather than give in to the constant need to nag, focus on the things that really matter and are worth discussing and discuss them. Nothing is going to get better if you’re constantly nit-picking everything about him — that will just frustrate him and push him away.

Putting him near the end of your to-do list

A high-stress job, combined with all of life’s other responsibilities can often mean your significant other is your last priority. But thinking that he’ll “always be there” no matter what is a huge mistake and one that can easily backfire. While you’re at endless meetings and events, assuming he’s at home waiting for you, he could be getting more and more frustrated you’re never around. And then one day he might act on those feelings. Make sure you make time for your guy so he doesn’t feel taken for granted.

Expecting more than you give

Expecting a lot from your partner is OK — we all deserve to be treated well, but if you’re simply expecting the world without giving anything in return, you’re taking advantage of the person you’re with. A successful relationship, one that lasts, involves equality when it comes to who does what for whom. You do things to make each other happy and there’s give and take, rather than the relationship being a one-way street of taking. If your relationship isn’t balanced, figure out a way to get it back on track before he realizes he’s being taken for granted.

Sure, you want him to eat healthy, ditch bad habits, exercise and wear nice clothes, but if you’re constantly acting like his mom, rather than his girlfriend, he’s going to get tired of it. Just like he already has a boss (and doesn’t need another), he also has a mom so you don’t need to be in that role. If you find yourself treating your guy like he’s a child, ask yourself why and do your best to curb that behavior because it can be demeaning and stifling.

Knowing when to see a marriage counselor
What makes a relationship strong
Tech in the bedroom: Dos and don’ts