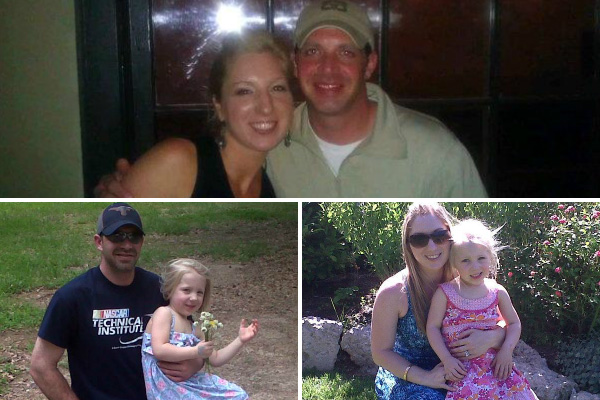 Elizabeth began her healing journey once she decided to see a personal counselor on a regular basis, shortly after Brian’s death. “I also found a lot of comfort spending time with my daughter,” she fondly remembered. “She was the only one who could bring a genuine smile to my face and gave me a sense of purpose.”

Self-help books also came in handy, and she began attending a support group for young widows and widowers, but it wasn’t exactly what she was looking for. She was inspired to start her own group, which she called Soul Widows, seven months after her husband died. There, she was able to connect with other women and made friends with many who had similar experiences. She also helped found The Respite: A Centre for Grief & Hope. “This is the type of place I wish would have been available when I was going through the early stages of my grief,” she said.

Elizabeth met her current husband, Tim, shortly after she started her Soul Widows group. She was beginning to feel more settled, and Tim, a former Special Forces Ranger, was already out of the service. She felt that he could relate to her experiences since he had been in the military. “He had lost several friends while serving overseas, and he could understand my relationship with the military and what it feels like to lose someone from war,” she shared.

He was good at sharing his feelings and had a great sense of humor. “He also had a quick connection with my daughter,” she said. “There was an ease about the way he was with her, as he also has two children of his own. He has been very supportive around my book and putting my voice out there.”

Elizabeth explained that she has grown a lot as she has realized how her losses continue to impact her life. “In the beginning of our relationship, I felt a bit shy about revisiting the topic of my losses, but as time has gone by, I’ve been able to integrate my losses into my ‘new’ life in a way that feels natural,” she told us.

She has had an easier time communicating her needs as she continues to grieve and heal, and has also learned to appreciate every day for what it is. “Being in a new relationship has shown me that there are new chapters to experience and that life will continue to move forward,” she shared. “I have been reminded that I’m always worthy and capable of being loved, no matter what I’ve gone through.”