Elizabeth experienced two major losses right in a row — a stillborn son followed by the death of her husband. Her love story will pull at your heartstrings, and her journey through grief and despair, to healing and recovery, is nothing short of inspiring. 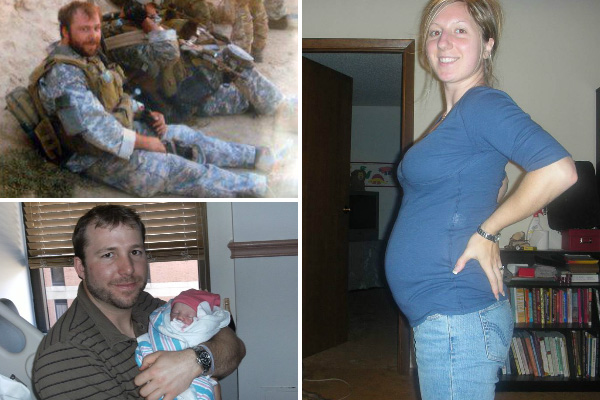 Elizabeth Berrien, the author of Creative Grieving: A Hip Chick’s Path from Loss to Hope, the founder of Soul Widows and a co-founder of The Respite: A Centre for Grief & Hope, shared with us two life-changing experiences that left her bereaved and adrift. Elizabeth lost a son to stillbirth, and soon after her husband was killed while on Army duty in Afghanistan. From the ultimate low, this young widow was able to work through her severe grief and not only work on her own recovery, but she was inspired to reach out to other women with similar experiences to help them get back on their feet.

Elizabeth, who grew up in Michigan, met Brian on a dating website while they were both living near one another in North Carolina. It was the first time Elizabeth had tried out this sort of technological meeting ground, but she said that when they started sending each other messages, they hit it off right away.

Around a week later, they met in person, and she said that it just seemed meant to be. “He drove up to the mountains to meet me and there was an instant connection,” she happily remembered. “We both knew right away that we wanted to be together.”

While they were dating, she found out that he loved to make others happy and worked hard to impress people that he cared about. When he was first getting to know her parents, he invited them to their apartment to show off his cooking skills. He prepared a home-cooked meal and ensured that everything was perfect, and the night went off without a hitch.

However, it didn’t go so well when her sister came for a visit. “He wanted to impress her too and tried making a beef brisket but it turned out as hard as a rock!” she told us. “He was so embarrassed and ended up throwing the whole thing out. My sister thought it was funny because everyone had been raving about his cooking. He promised her that he’d make something delicious and to her liking the next time.”

Elizabeth’s first experience with grief came when her baby boy was born still. “I had gone through a healthy nine-month pregnancy with my son, and went into labor right on his due date,” she explained. “I had a feeling that he was going to come right on time.” Her 14-hour labor went well, but when her baby’s head emerged, he became stuck and the doctor had to maneuver the cord out from around his shoulder. He weighed nine pounds and was absolutely beautiful, but he wasn’t breathing, and never began. “They gave him to me to hold, and I kept him on my chest for over an hour,” she remembered. “I held him as long as possible.”

Brian was in Afghanistan 18 months later on the final deployment he owed the Army. He was there for only six weeks when he was shot and killed on a three-day mission. “His team was chasing members of the Taliban when he was shot in the back of the head,” she told us. “It happened very quickly, and they believe he didn’t feel anything.” Elizabeth was staying at her parents’ condo with her 6-month-old daughter when she got a phone call from an Army chaplain. Ordinarily, Brian called her at the same time every day to check in, but several hours had passed since their regular chatting time and she was already feeling a lot of anxiety.

The chaplain explained that Brian had been shot, and Elizabeth instantly went into shock. “I could feel my knees begin to buckle underneath me, and my heart went into my throat,” she shared. “I felt very faint. While I was still on the phone, my girlfriend showed up and could see that something was wrong. She held my daughter while I started throwing clothes into my suitcases. I felt a very wide range of emotions. I mainly felt anger and fear mixed with disbelief. “

Elizabeth operated on auto-pilot during this time, and reported that she felt very numb. The military flew her to Germany with Brian’s sister to say goodbye. She didn’t know the extent of his injuries until she got there because they wanted to tell her in person. “I spent the next two days at his side in the hospital,” she explained. “I barely ate and did not sleep. I called my family several times throughout the time that I was there so that I could get extra support, and cried nonstop. Once I was flown home, I completely broke down when my family and a group of girlfriends met me at the airport. I was taken back to my sister’s house and constantly had my friends or family members around to help with my every need. The rest is a blur. I spoke a lot about the events that had just occurred because my mind was trying to process the loss. I mainly stayed in bed and welcomed sleep when it came.”