I watched the TLC special Extreme Cougar Wives with both rapt fascination and horror. We’re all familiar with the cougar craze, where older women date younger men. Extreme Cougar Wives featured women who were sometimes at least 30 years older than their boyfriends (only one of the couples was married). Step inside this phenomenon for a closer look. 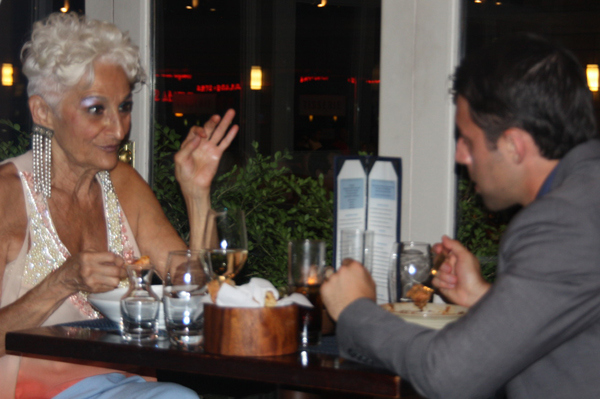 Is it OK to date someone your great-grandkid’s age?

I caught a rerun of Extreme Cougar Wives which featured 76-year-old Hattie who bragged to her 20-something date that she had thrown down with an 18-year-old not too long ago. Shouldn’t Hattie have made the boy a batch of cookies instead? I’m not here to argue why it’s OK for a man to date a much younger woman (who ever said it was?) — I’m sure here to say, “Whaaaaa?”

Let’s start with the fun part. On this show, a 53-year-old woman “married” (it was a handfasting ceremony) her 21-year-old boyfriend. The mother of the boy was crushed, as his new bride was older than she was! One of the women in the other “I was 37 when you were born” couple suffered open ridicule from her much younger lover’s friends. Three girls were disgusted when they learned their hot bartender was involved with the old woman sitting at the other end of the bar. These relationships are not without their problems, but hey, all relationships are difficult, right?

Inez Bracy, a lifestyle transitions coach, says she has a “resounding yes” for the “are there advantages to dating a much younger man” question. She goes on to explain that this age group of men is usually more vibrant and more up on world events.

Um, if I may Inez, interject for just a moment. Having been divorced after a 20-year marriage at the age of 39, I am all too familiar with the cougar craze. Maybe I was attracting a different sort of “younger man,” but I am here to testify that not one of them was “more vibrant” or “up on world events” than the 51-year-old I’m currently dating. To the contrary, several of the young men I dated were so inebriated they had equipment failure — repeatedly. Another young man was so devoutly religious that he had equipment failure — repeatedly. This is not how I define vibrant. None of them could speak much about world events. The only stories 28-year-old Tad had to share were those of his bipolar roommate. If I wanted to know the latest details on a recently released video game, then we’d have something to talk about. Still another young man literally slept on every outing to the point that my friend and I started calling him Mr. Narcolepsy.

The expert weighs in

My questionable experience with younger men notwithstanding, I wanted to know what’s behind this undeniable trend. Marti Battista, certified life coach and dating expert, explains that older women may have more in common with younger men from a lifestyle standpoint: “As women age more gracefully and are financially independent, they may feel that it’s a challenge to meet men with the same level of vitality and freedom they have. This trend is in alignment with the de-feminization of professional women who feel more comfortable in the stereotypical masculine role of provider. Having spent their younger years building a successful career, they now want to settle down with a much younger man who can fit easily into their busy lives.”

That strikes a chord. Now that I’m in my 40s, I don’t need a sugar-daddy or a baby-daddy. I need a Miss B. Haved daddy who wants to live a fun, spontaneous life and has the freedom to do so. Older men are often tied down with kids from a previous marriage, ex-wives and grueling careers to support the aforementioned.

How much of an age difference is too much? Relationships are like fingerprints — unique to the people who are in them. There do seem to be certain rules of thumb to go by when it comes to an age difference. Do people laugh and point at you when you’re in public? Were you going to your 10 year class reunion when your date was born? Is your date as old or older than your kids? Does your date smell like Hollister cologne and you smell like Bengay?

On the other hand, dating a slightly younger man (who is not more than 10 years younger) may be the perfect transition for some women who find themselves divorced mid-life, so long as cougars don’t lose sight of the fact that the younger man may want marriage and kids in the not too distant future.

My most vengeful act against my ex
When is it OK to go to dinner with a married man?
When the adult sleepover has consequences