The U.S. Supreme Court struck down the Defense of Marriage Act in a Wednesday ruling. The act had defined marriage as only between one man and one woman. 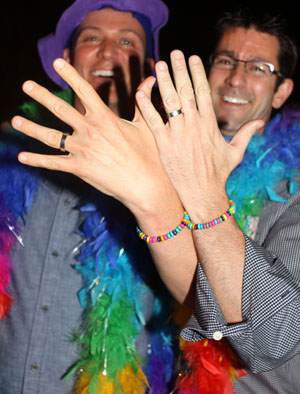 The Supreme Court of the United States struck down the Defense of Marriage Act on Wednesday morning in a 5–4 vote. The law — which bars the federal government from recognizing same-sex marriages legalized by individual states — was voted down by SCOTUS justices Ruth Bader Ginsburg, Stephen Breyer, Sonia Sotomayor, Elena Kagan and Anthony Kennedy.

“The federal statute is invalid, for no legitimate purpose overcomes the purpose and effect to disparage and to injure those whom the State, by its marriage laws, sought to protect in personhood and dignity,” Justice Anthony Kennedy wrote in the majority opinion ruling.

“By seeking to displace this protection and treating those persons as living in marriages less respected than others, the federal statute is in violation of the Fifth Amendment.”

DOMA — signed into law by President Bill Clinton in 1996 — prevented same-couples from receiving the same federal benefits as heterosexual couples. President Barack Obama advocated a repeal of the law during his 2008 presidential campaign, and his administration publicly declared section 3 of the law as unconstitutional in a 2011 statement by Attorney General Eric Holder.

After careful consideration, including a review of my recommendation, the President has concluded that given a number of factors, including a documented history of discrimination, classifications based on sexual orientation should be subject to a more heightened standard of scrutiny. The President has also concluded that section 3 of DOMA, as applied to legally married same-sex couples, fails to meet that standard and is therefore unconstitutional. Given that conclusion, the President has instructed the Department not to defend the statute in such cases.”

“This ruling is a victory for couples who have long fought for equal treatment under the law,” he said in a statement.

The SCOTUS also weighed in on California’s controversial Prop 8 on Wednesday, ruling by a 5–4 vote that the traditional marriage supporters who put the measure on the ballot on 2008 did not have the constitutional standing to defend the law in federal court.

“We have never before upheld the standing of a private party to defend the constitutionality of a state statute when state officials have chosen not to,” Chief Justice John Roberts said in the majority opinion. “We decline to do so for the first time here.”

This ruling upholds Judge Vaughn Walker’s 2010 judgment against Prop 8, essentially paving the way for legal gay marriage in the state.

Matt Nathanson: “it’s been a real good 24 hours for the things i believe in.”

Jesse Tyler Ferguson: “Remember the old days when #DOMA was around and gay people couldn’t get married in California? Crazy right!?

Andy Cohen: “I never dreamed I would see this day. The whole world has changed for us all. I can’t believe it!! #DOMA #Equality.”

George Takei: “Today marks a watershed moment in history and a tremendous victory for the principle of equality.”

Celebrities speak out on gay marriage
What does that equal sign on Facebook mean?
10 Gay TV couples we want hitched