Texas state senator Wendy Davis is in the middle of a 13-hour filibuster to block a GOP-led effort to restrict abortion access in the state. 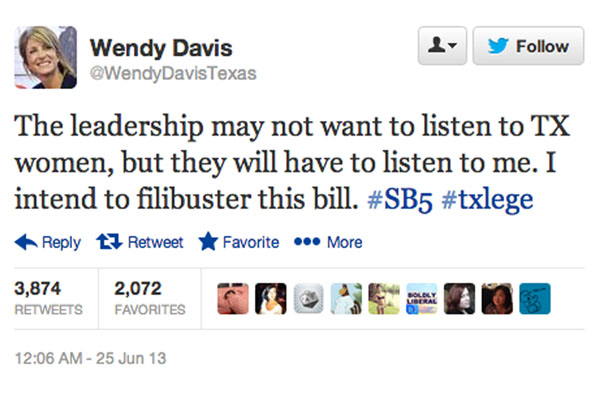 “The leadership may not want to listen to TX women, but they will have to listen to me. I intend to filibuster this bill,” Davis tweeted before the session.

The bill — which has until midnight to pass — is said to be one of the most restrictive in the country. Supporters say it will help raise the level of care for women, but opponents say it will limit care to women who need it most.

According to the Dallas Morning News, SB-5 would ban all abortions after 20 weeks. In addition, all abortion clinics would be required to upgrade to “high-standard surgical centers,” and abortion providers would need to have admitting privileges at hospitals. Abortion-inducing medication would also fall under new restrictions.

Davis — clad in pink tennis shoes — is not allowed to sit, lean or use the bathroom during her 13-hour filibuster. She’s reportedly filling time by telling stories from women who would be affected by the bill, as well as by engaging with other senators.

If it’s successful, Davis’ filibuster will keep state senators from voting on SB-5 this legislative session. However, Gov. Perry, an outspoken abortion opponent, has the power to call another special session.

“Any speculation on another special session is still premature,” spokesperson Josh Havens said of Gov. Perry’s plans, according to the Austin Chronicle.

You can watch Sen. Wendy Davis’ filibuster on the Texas legislature’s livestream.

Davis’ filibuster ended after 11 hours after leaders in the Texas legislature determined she violated three rules of order. However, chants of “Shame!” and “Let her speak!” delayed voting on SB-5. Voting started at 11:45 p.m. but didn’t end by midnight as required by law.

“This will not become law,” Sen. John Whitmire, D-Houston, told the room just before 3 a.m., according to the Austin Statesman.

“Today was democracy in action,” Davis told the crowd afterward. “You all are the voices we were speaking for from the floor.”

As for her feelings, Davis added that her back hurt “And I don’t have a whole lot of words left.”

Both women and men took to Twitter to express their feelings over Davis’ filibuster.

“Thank you @WendyDavisTexas. What you did wasn’t just for Texas, but for the health of all women.” — @mom101

“Dear @WendyDavisTexas we are so grateful and proud. Side note: I just stood up for around 25 minutes and found it physically challenging.” — @lenadunham

3 hrs ago
by Sara Dobie Bauer