Turns out, online dating is a lot like a box of chocolates. You never know what you’re gonna get! For some of these women, it was a total success. And for others, well, not so much… 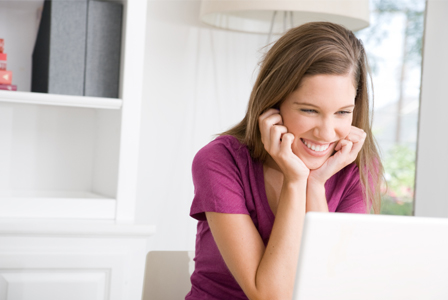 “I met my love on OkCupid. I was on the site for about three weeks, and he was on for about 10 minutes and hadn’t even filled out his profile fully when I sent him a message. We talked for countless hours on instant messaging for four days before we met in person. That was it! We quickly removed our dating profiles and have been a happy couple ever since. He proposed on day 364 right before we were leaving for my granddaughter’s first birthday party. We married in my dream location, on the beach in Mexico in February of 2010, and love and appreciate each other more than ever!” — Angil Tarach-Ritchey, eldercare expert and award-winning author

“I met my husband on True.com in 2007, and we just celebrated our fifth anniversary in June. I was providing expert testimony for some online dating legislation for the site, and they offered me a free profile. I took them up on it. My husband’s profile was the first to pop up as a match. I ‘winked’ at him, but did not hear from him for over a month. In the meantime, I met two other men who turned out not to be what they first appeared to be. When my husband and I finally connected, we graduated from emails to phone calls, and in August 2007, we met in Hampton Beach, New Hampshire, for lunch. He told me afterward that he knew he would marry me. He lived three hours away, so he began spending the weekends at my home in Maine. In September, we went to a wedding of a friend of mine, and he asked me to marry him. I said yes on the condition he move in with me and we wait. We married on June 7, 2008, on the end of a jetty at Wells Beach, Maine, (he picked the spot out) with two friends who stood up for us: a retired cop friend of mine who married us and a photographer. It was simple and fun, especially when people clapped and hooted when we walked back to the beach.” — J.A. Hitchcock

“About six years ago, I left an emotionally abusive marriage of eight years. I (unwisely) entered a relationship with a female friend immediately following the split. While I’d identified as bisexual since I was 19, she was my first female partner. That ended in disaster two years later for a whole host of other reasons, so here I was, nearly 35 years old, and having to learn how to date for the first time. A friend of mine suggested I try online dating, and she recommended OkCupid. I was skeptical. However, it was free, so I created a profile with no expectations at all. I exchanged messages with a couple of people and went on a couple of dates that were pleasant. Then Stephanie’s profile showed up. She was in my area. She loved the same geeky television shows I did. She said that indie music and feminist theory were two of her favorite things. She had a cat. The first thing I thought was, ‘I would be friends with this woman even if we don’t date.’ So I messaged her. A few messages later we met for coffee after work. The connection was instant. Our first date lasted nearly six hours. When I got home that night, I updated my Facebook with, ‘This one might have possibilities.’ That was four years ago in August. We moved in together two and a half years ago, and today we have a happy, feminist, vegetarian household full of pets and inside jokes. I didn’t just find a girlfriend, I found a friend, a confidante and a partner.” — Susan H.

Up next: Online dating horror stories >>