Couples who make it through the tough times are the ones we admire the most. We spoke with couples who almost got divorced but found a way to pull through. Here are their stories. 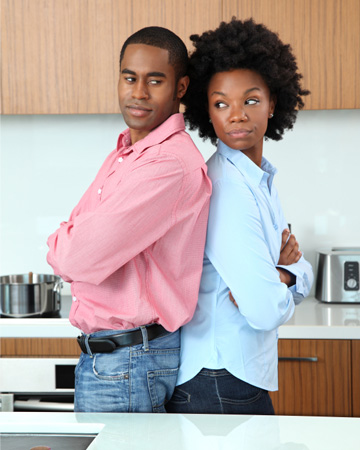 When we marry, we vow to stay together “for better or for worse,” but with 50 percent of all marriages ending in divorce, clearly this is a vow that’s broken all too often.

We spoke with couples who were on the verge of getting divorced but managed to pull through and stay together. They’re sharing their stories and offering advice to those who may be in the same situation. Marriage takes work, but it’s always worth it in the end.

Mariah and her husband are celebrating their 10-year anniversary this October. They moved fast — getting married and becoming pregnant all within two months of meeting. Shortly after moving in together, their struggles began. Three years ago, Mariah told her husband she was ready to end their marriage.

Instead of divorcing right away, they mutually decided to do everything in their power to give it one last shot. They kissed more, hugged more and spent more time together as a couple and as a family. They even moved away from their own families so they would solely have to rely on each other. It was a risky move, but it worked. Mariah and her husband are now closer and stronger than ever before.

Michelle states that therapy is what saved them

Michelle and her husband were on the verge of divorce over the holidays. They had been stressed out the past few years over having a baby and moving away from family. A final, devastating fight separated them, but a skilled therapist was able to bring them back together. They continue to go to couples’ therapy and individual counseling to work out issues from their childhoods. Michelle warns that having children of your own really brings to light your own issues in childhood, and it’s best to face these head on. She and her husband are in a better place now, slowly learning how to reconnect and communicate the right way with one another.

Kenda dealt with a cheating husband

Kenda and her husband have been on the verge of divorce more than once. He was having an affair that lasted three and a half years, and even moved in with his mistress and filed for divorce from Kenda. Ultimately, her husband decided he didn’t want to get divorced, and Kenda was willing to forgive him. She refused to give up on her marriage — a mentality we could all learn from! They pulled through together. They were both incredibly motivated to work on their marriage and repair the years of damage that was done. They’re now a stronger couple, and Kenda never holds his affair over his head.

Why you should work it out

Divorce is extremely hard on both people, even the spouse who initiates it. Couples tend to grow apart throughout their years of marriage if they don’t put in the daily effort required to maintain it. Instead of changing their ways, couples assume that they just married the wrong person. Unfortunately, there is no one person that is completely 100 percent perfect for you, because perfect people do not exist. Try focusing on your spouse’s good qualities — the qualities that made you fall in love to begin with — and work on fixing yourself instead of them.

Learning to love the one you married is one of life’s biggest challenges — don’t give up so easily!

What is marital depression and how to avoid it
Tech in the bedroom: Dos and don’ts
Women who have resisted the urge to cheat and how