Weddings are a time for families to come together and celebrate, but they can also be a time for drunken in-laws and meddling moms. 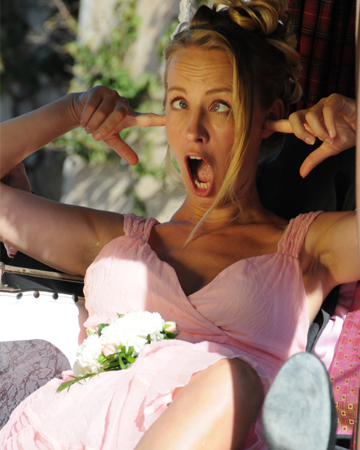 Here, we round up real stories from brides and wedding guests who had wedding experiences that were nothing short of dramatic.

(At the sources’ requests, some names have been shortened, changed or left anonymous to avoid offending family members)

A hungover DJ is better than no DJ…

“Since my husband is from Kentucky, all of his friends had to travel nine hours to the wedding festivities. Most of them flew into northwest Arkansas, and we went out on Thursday evening to bars and had a blast. When all the guys get together, they think it is spring break in Panama City. Along comes Friday, which is the rehearsal and rehearsal dinner. All I asked my husband to do was to ask the groomsmen to behave at the rehearsal since it was at the Baptist church. Well, what do you know — they all show up pretty tipsy, and it is all they can do to get through the rehearsal on good behavior. We then go to the rehearsal dinner, where they have some fun and then go back to their hotel to partake in some drinking prior to going out to the bars. …

My future brother-in-law, who is supposed to be the DJ the next day at the reception, is drinking whiskey. He has all the music on his iPod and has been playing music from it all night. I get there to pick him up, and I can barely get him in my Trailblazer. I start driving, and he starts vomiting in my car. I pull over and push him out in the field so he can throw up in it. This is all the night before my wedding. The next day, he cannot find the iPod with the music. Thankfully, my husband’s friend somehow finds the iPod and everything is working on it. My brother-in-law ends up being the DJ that night with the worst hangover ever, but at least he redeemed himself after such a lackluster performance the night before!”

A bride learns the downside of hiring family…

“My mom is a floral designer and offered to do the wedding flowers for us for free. We sat down and decided on a design, colors and most importantly what I did not want. I trusted her to do the flowers, so I just wanted to make sure she knew what I didn’t want. Every step of the way she complained, and the design kept changing week to week. So the week of the wedding arrives and family starts to fly in. Once they got here, everything went out the window. She went from offering flowers to [complaining and trying to] redo the entire wedding in a week.

I had to sneak in and redo the gift baskets for out-of-town guests because she filled them with stuff from the dollar store. Our wedding flowers were done the night before — design and all — and looked terrible. My wedding bouquet was made out of fake flowers, and looked like it. My wedding bouquet had to be cropped out of close-up photos due to how fake it looked. I was able to get the stale dollar store food out of the gift baskets so the guests ended up with the original items: Bottle of wine, glasses, engraved corkscrew and a few other little items. I love my mom but this taught me never to have anyone I know and love help with anything. Vendors are there for a reason, and that reason is sanity.”

A family showers the bride with drama…

“I found the shower invitation that I wanted on Etsy. I wrote back and forth with the woman and nailed it down — all my mom had to do was make the order. Well, my mom had never purchased anything on Etsy before so she was a little confused on how it worked. And it’s fair to say that my mom can be a little overwhelming with her questions if she doesn’t fully understand something. So without my knowledge, my mother and this woman had a spat over Etsy. I then received a response from the Etsy seller that [began] like this: ‘I’ve been in contact with your mom and unfortunately, she has proven very difficult to work with … I just wanted to let you know that I will not be able to fulfill this or any future orders with her.

“Then at the wedding shower, my future mother-in-law’s sister (we can call her Mary), who is kind of known for creating drama, questioned my future husband’s 15-year-old niece (we can call her Sandy) about a towel Sandy borrowed from her great-grandmother’s brother from down at the beach. I guess this towel was borrowed on Friday, and Sandy was told she could return it at her leisure. Well, on Sunday at the shower Mary was all over her, saying ‘Where’s that towel? You’d better return it.’ Then Sandy refused to sit with Mary and had to sit at my table, leaving one open spot at Mary’s table. Well, I had friends who got lost and were late, so one of them had to get stuck at the table with Mary.”

A meddling mom has a meltdown…

“My boyfriend ‘Marc’ is French and comes from a very bourgeois family… old money, fashionable clothes, snooty mannerisms… even though he isn’t that way at all. His sister ‘Astride’ got engaged one summer to her live-in boyfriend, ‘Jean,’ and they planned to get married the next summer at her parents’ summer house in the South of France. I knew from the start that it was going to be drama central, because Marc’s mother, ‘Olivia,’ is a super snob with a fiery temper. …

Sure enough, on our first day there, Olivia comes home from the hairdresser and pulls a huge, screaming tantrum because the dye job isn’t exactly perfect (she looked exactly the same to me). She screamed out, ‘This is my daughter’s wedding, and I want to look perfect or I won’t be happy!’ and then stormed off into the house and slammed doors behind her. This was only the start of many screaming tantrums. She screamed at the groom for not getting the right haircut. She screamed at the bride for eating too much cheese one day, and then told her that she should’ve paid for Botox injections before the ceremony because her ‘wrinkly forehead’ made her look haggard.”

Real love story: To Vegas and back again
Women who eloped tell all
Newest trends in wedding invitations