Obviously most of us don’t have our credit scores tattooed on our foreheads, but many people try to cobble together that almighty number with a few strategic questions. So the question stands: Can it affect your dating life? 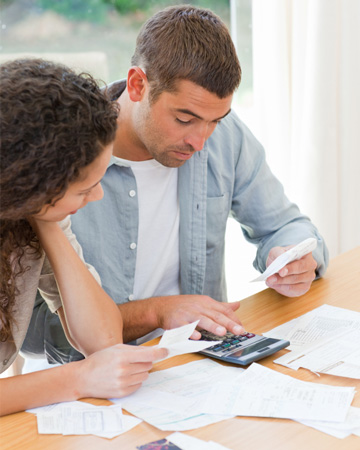 Depends on whom you are dating, says Ramani Durvasula, a professor at California State University’s Los Angeles campus.

You marry your mate’s debt

A new study by University of Wisconsin researchers shows women with debt are less likely to get married than their debt-free girlfriends. Debt has also caused 15 percent of new college graduates to postpone getting married.

More than ever, credit scores can definitely affect your dating life. In a world where technology has proliferated into our dating lives, people are looking to quickly “screen people” in or out, and a potential mate’s financial instability often is a deal breaker. With over 50 percent of marriages currently resulting in divorce, singles don’t want to take on someone else’s bad financial decisions from the past.

“I think the hardest part of dating is that few want to be that transparent about what they are doing — it feels sort of vulgar to reject someone because they once didn’t pay their bills — but fact is, if it is your reason, then own it,” Durvasula says. For some people who care about owning a home and having financial health and sharing this with a partner — bad credit in a partner could create a lot of tension — and you are kidding yourself if you think it will just “go away.” Like most faults we bring into a relationship — in the light of “new love” or some such nonsense — the other person may feel like they can ignore it, but I will guarantee you that over time they will hit you over the head with that credit score.

“Bottom line: People want to know the other person’s financial situation,” says millionaire matchmaker Susan Trombetti, CEO of Exclusive Matchmaking. “They don’t want to pay more for a mortgage, of course, but more importantly, they don’t want to bail someone out financially.” Aside from the typical loss of job problems, which affects your credit score and a lot of people these days, there is a lot more a credit score can reveal which is more noteworthy to a relationship. For example, current economy problems aside, poor scores can indicate a much deeper problem that has a bigger impact on a relationship than a mortgage.

Once we are adults, most of us pay our bills, but Susan says there are certain red flags that a low credit score could point to, which would also make that person a relationship don’t, such as:

And anyway, over time, these habits could hurt you as a couple. “In a serious relationship, the topic of a long-term investment like a car or mortgage will come up eventually,” says Howard Dvorkin, a CPA and founder of Consolidated Credit. He is also the author of Credit Hell: How to Dig Out of Debt.

“If one person is unable to open a credit or mortgage because of a low credit score, it can cause tension to build up. A delinquent account will show up on a credit score for seven years, so if a couple plans to have a future together, the credit worthiness of each respective partner can be an issue. Ideally, each partner would want their significant other to have the same financial responsibility as they do; if not, one partner will be too reliant on the other, and vice versa,” says Dvorkin.

“You need to know what you are getting yourself into before things get serious. If you don’t, you are putting yourself and your relationship at risk when that person may not get a job,” says Denise Winston, financial expert and author of Money Starts Here! Your Practical Guide to Survive and Thrive in Any Economy. “You may end up losing respect for someone and becoming resentful over time. Money is one of the leading causes of divorce and stress. You get to make the decision upfront and know what you are getting yourself into… you want to know in advance.”

The other side of the pond (err… story)

Rochelle Peachey, a dating/relationship expert and founder of transatlantic dating site I Love Your Accent, says that as a British woman living in the U.S. and with her site involving U.K./U.S. members, she has heard horror stories from British men who felt as though they were on an interview when dating NYC and DC women.

“In the U.K., you can fake it until you make it or keep it under wraps if you have fallen on hard times and have a few late payments and a dipping credit score. Also, personal details are not so easily accessible. Here in the USA, we can go online and discover all the mad, bad and sad incidents that a potential date may have incurred. Of course it’s understandable not to want to date a guy who cannot pay his bills or pick up the tab occasionally, but to judge a potential suitor by his credit score is not always good,” says Peachey.

Married with babies? Real couples share how to keep the spark alive
How to sound smart to a guy
50 crazy sex facts