There are some foods that are bizarre, like cows brains and ox testicles, but then there are foods that are just plain creepy. We’re not talking fake creepy, like gummy worms or jelly hearts, but really squirmy, strange and creepy foods, like scorpions, live octopus and maggots! 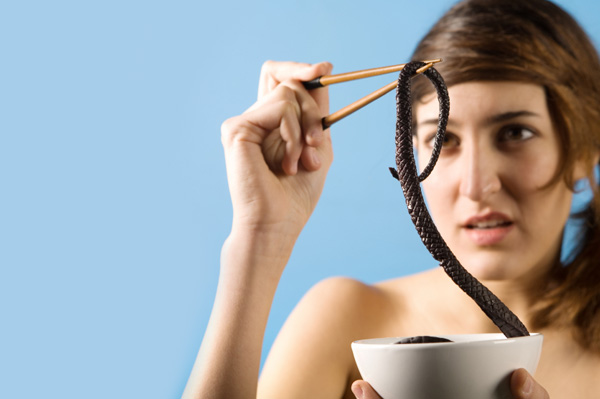 There are some foods that are bizarre, like cows brains and ox testicles, but then there are foods that are just plain creepy. We’re not talking fake creepy, like gummy worms or jelly hearts, but really squirmy, strange and creepy foods, like scorpions, live octopus and maggots!

Could you sit down and eat a plate of moving, living maggots? The thought alone makes our skin crawl, and we break out in hives. However, to some, a big plate of fish eyes and a large sheep’s head are a normal holiday menu item. We ask you, could you eat one of these creepy foods? If so, you’re braver than us. We’re hiding underneath the table at the thought.

Octopus is a worldwide delicacy, especially in most Southern Asian countries. However, Americans are used to eating it deep-fried and coated in batter. In many countries though, this seafood is served raw on a bed of it’s own ink. But don’t worry; it’s not actually alive. The tentacles move even after they’ve been chopped from the head of the octopus.

These crispy, crunchy arachnids are one of the most popular snacks in Beijing and are making their way across the world, showing up in many state fairs and carnivals. The shell provides a nice crunch and the insides are actually quite mellow. For a bit of sweetness, ask for yours deep-fried and dipped in chocolate. This might make it easier for you to forget you’re eating an insect.

If you’ve had your fill of foie gras and want to enjoy another organ of the duck, why not order a plate of duck hearts? Hearts are all muscle, so when they are grilled or slow cooked all you get is rich, very indulgent, very tender meat. But we get it: The thought of eating something’s heart is a little Hannibal Lecter.

To us, these are a little creepier than the heart since you’re basically being watched as you eat. Not sure what an eye tastes like? Think of a Gusher, says the folks at Delish. The insides burst with fishy goodness when you chomp down on them. They’re full of omega-3 fatty acids, are extremely popular in many Asian cultures and are often served on their own or in soups.

Why would you order a regular candy apple when you can have one covered in sauteed mealworms instead? A mealworm candy apple is one of the most strangely popular snacks at the annual Arizona State Fair. Why? For one, the worms are a bit salty and crunchy, which pairs perfectly with a sweet treat. Many fair-goers compare the taste to fried onions or popcorn.

Escamoles are the larvae of large ants. Escamoles are very popular in Mexican cuisine and are often found mixed into guacamole, simmered with spicy enchilada sauce and served over top of fresh tortillas. It’s technically insect caviar, so it’s a very appropriate choice for dinner parties and soirees.

If you thought escamoles were hard to digest, wait until you try a pinky, or a cooked newborn mouse or rat. These infant rodents are eaten whole in many Asian cultures and are typically deep-fried or grilled. If you can wrap your mind around eating a newborn animal, the taste is a bit like chicken and rather mild. Many are served like spring rolls and come with a zesty dipping sauce.

Fried scorpions have nothing on A-ping, or deep fried tarantulas the size of your palm. A-ping is found in Cambodia and many locals have underground lairs where they breed thousands of tarantulas, just for the purpose of eating. We don’t know what’s creepier, a lair filled with giant tarantulas or physically eating one.

This Sardinian specialty, aka maggot cheese, is known as the most pungent, strong and intense cheese in the world. The cheese (which is usually pecorino, a sheep’s milk cheese) goes through normal fermentation until cheese fly larvae are introduced. The flies break down the cheese fats, making it very soft and gooey. Unless you’re Andrew Zimmern (or from Sardinia) you can really only find this on the black market.

And the creepiest food on the list today? Smalahove, or a whole sheep’s head. This extremely popular Norwegian specialty is served during the holiday season and is a national delicacy. It’s often salted, dried and then steamed or boiled. But all of the parts remain on it, including the eyeballs, nose and mouth. Having a plate of sheep’s head reminds us too much of that scene in The Godfather when he wakes up with a dead pony head in his bed.