Raise a glass to warm weather and great beer! Session beers are perfect for the season.

Summer sun and cold beer go hand in hand, but who wants a heavy, dark beer during the warm weather? Session-style beer is a lighter, lower-alcohol beer that is perfect for the season. 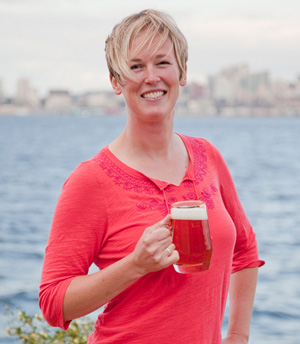 What’s the buzz about session beer?

According to Robyn, who studied for and passed the Cicerone Certification Exam to become the first female Cicerone in the state of Washington (a Cicerone is like a sommelier for beer — someone who knows beer inside and out and how to pair it with particular foods), session beers have been around for a long time. “Session beer is a British concept that some people say originated with workers who were allowed designated times to drink, but were expected to be functional when they returned to the job,” she explains.

A standard characteristic of session beer is that it’s lower in alcohol — under 5 percent alcohol by volume (AVB), a number that some might debate. Robyn notes that session beers have a balanced malt and hop profile that’s not too overpowering. “It’s meant to be enjoyed in ‘sessions,’ which I would loosely define as extended drinking events,” she says.

“At Redhook,” says Karmen, “beer culture is about letting go of the stress of the day, kicking back and enjoying a few really good beers. Session beers allow folks to do that without losing control of themselves or their taste buds.”

The warm weather of the summer months inspires food-and-drink-filled gatherings like picnics and barbecues — times when people might consider drinking a lighter beer. “A super hopped Imperial IPA or high alcohol barley wine is great on occasion, but not something folks can drink reasonably for everyday occasions,” says Karmen.??

So session beers are considered “light” beers? Not necessarily. Both women were in agreement about the distinction between session beers and what most of us think of as light beer. “Session beers are absolutely not less flavorful,” says Robyn. “The ‘light’ beer style made popular in American beer drinking circles refers to beers that are lower in calories, not necessarily lower in alcohol.” Session beers can maintain flavor, while keeping alcohol content lower.

“Drinking a few session beers in a reasonable amount of time shouldn’t get you drunk, and the beer should never overwhelm your palate,” says Karmen. “Redhook has several beers that would be considered session beers. Our Wisecracker Wit, which is just above the 5 percent ABV mark, could fall into the session category. It’s a Belgian-style ale with a subtle ginger kick. Think lazy, warm summer days poolside; a few friends, the cooler’s packed with ice, and there’s not a place in the world you’d rather be.”?

Clearly, based on who our two subject matter experts are, the beer business isn’t just for men. “Women are involved at every point in the process, from sales, to marketing, to brewing to ownership,” says Robyn. “There is an unfortunate misconception in the beer world that brewers must be large, bearded men. That perception is changing rapidly as women are entering the business and in general, drinking more craft beer.”?

10 hrs ago
by Eugenia Miranda Richman