While many of us gals are more than glad to toss back a Guinness, some girls need a softer introduction to the world of premium beers and microbrews. If you’re more of a piña colada chica, start yourself off with these girl-friendly pints. 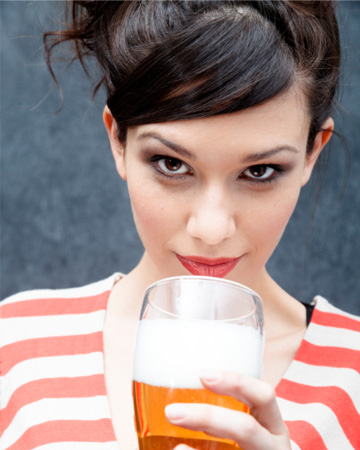 Gourmet beers are all the rage, but a lot of us consider beer less than ladylike. If you fall into that category, you’ve probably just never had some of these girl-friendly brews.

This rose-colored beer is a raspberry Lambic, which is usually sweeter than the brews you’re used to. It has a fruity bouquet with a clean, raspberry flavor. This is a great starter beer for people who like wine coolers and berry-flavored cocktails.

Learn how to use your favorite beer for an at-home, spa-like treatment for your hair and face!

If your sweetie drinks Miller, Coors or Bud, you already know what a Pilsner is (well, kind of). While many ladies find the flavors of the Big Three bitter, watery or off-putting, that’s not the mark of a Pilsner itself. Pilsner Urquell is bright, herbal and just a little lemony with just a little hint of buttery-ness to every sip.

Burning River has a medium body, thick head and plenty of carbonation. Combining a moderate maltiness with a hint of caramel, floral and citrus, Burning River is an easy-drinking beer that pairs well with many pub foods.

This American-style wheat beer has a bit of raspberry puree added to the mix. There’s going to be a little pulp in the beer sometimes, and this is normal. You’ll love the sweet-tart taste. The name comes from the slightly hazy purple color that comes from the raspberries.

This rich spin on a traditional European brown ale has a smooth finish with a nutty flavor. You can really taste the hazelnut with a hint of carmel malt. It has just enough bitterness to mean you’re getting into the junior varsity league with regard to beers. Don’t let the name fool you. This isn’t nectary, but instead presents a balance of nuttiness and bitterness.

Brewed right in Colorado using Madagascar vanilla beans, Breckenridge Vanilla Porter is one of the sweetest, easiest-to-drink porters on the market. Yes, this is a dark beer, but it’s got a drinkable sweetness from the well-integrated vanilla.

Time to get into the serious connoisseur groove! You’ve graduated to a serious dark beer. Stouts are feared by many newbies, but coffee drinkers will appreciate Young’s malty coffee-like flavor and mouthfeel. What makes this stout especially fun for rookies is the unique flavor — its bark is bigger than its bite. The thick, creamy head gives way to the flavors of dark chocolate and espresso with a small (likely unintentional) reminiscence of gourmet cookie dough.

This pleasant dessert beer may seem easier to handle than our previous stout entry, but this milk stout is a bit complex. It starts like a stout, but ends with a syrupy sweetness. Delicious as it is, many beer novices are a bit off put by these types of beers at first, so it’s best to get your “sea legs” with Young’s before moving into these waters. But once you do, you’ll delight in the juxtaposition of stout to sweet. This one’s only for those who have a serious sweet tooth, though.

Now it’s time to step up to a more complex beer. Sierra Nevada’s Kellerweis Hefeweizen is one of the starter-friendliest beers made by a company known for complex brews.

A quick sniff will reveal the aromas of fruits like banana and papaya and just a bit of clove. Don’t let the flavor combo scare you, though. Sierra Nevada is good at taking complex mixes of ingredients and making a cohesive overall flavor profile. You’ll taste a bit of each ingredient if you concentrate, but mostly, you’ll just be left with a crisp, refreshing, summery flavor.