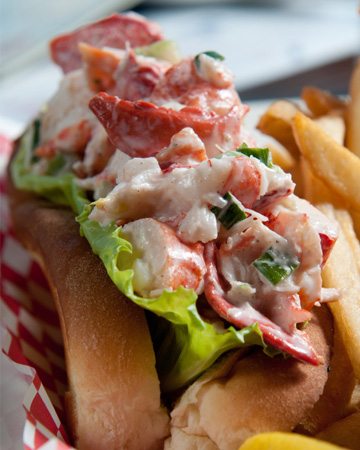 Countless pieces of advice could be given on what a lobster roll should and should not be and we’re here to set the record straight. There are two traditional rolls: butter-based and mayonnaise-based. History says that the butter-based rolls are the original lobster rolls, starting after 1912 when the first soft buns made their debut at state fairs. Warm lobster meat tossed in drawn butter and served on a hot bun is called a “lobster roll” and when the cold lobster meat is folded in with mayonnaise and served on a warm, buttered bun, it is called a “lobster salad roll.”

When choosing your lobsters, make sure to give them a good squeeze. Soft-shell lobsters mean that they have recently molted, will have less meat and will most likely be waterlogged. Squeeze them and find the hard-shells for a meatier creature. Pick the liveliest of the bunch, the ones that will fight for their lives; these are most likely the newest in the tank.

Try steaming to prevent getting more water in them. This will also result in firmer, large chunks of meat. Cook them, season while still warm and chill. Ideally you’ll be served cool, sweet lobster meat on a hot, buttered hot dog bun (our favorite!). Serve with chips and a cold Sam Adams brew, and you’re ready to start your summer season!

Restaurants on Cape Cod serve up lobster rolls by the thousands by the time the season ends in October. The amount of lobster meat that has been cooked, cleaned, tossed and served has to be in the hundreds of thousands of pounds. One of the most well-known lobster rolls on Martha’s Vineyard can be found at Grace Church in Vineyard Haven. Starting May 1 and serving rolls all the way until the end of September, it was been voted the No.1 place by islanders for many years! Sale of lobster rolls is Grace Church’s primary fundraising activity for local outreach ministries. Oh, and guess what? Grace Church only uses three ingredients in their rolls: lobster meat, mayonnaise and white pepper! Next time you’re on Martha’s Vineyard, head to Vineyard Haven and delight your senses with a few rolls!

What do others have to say?

We went to Twitter and asked chefs and food bloggers about their ideal lobster roll. Here are their delicious answers, in 140 characters or less!

Martha Stewart Just Made This Popular Dish Into Breakfast Food