Almost everyone has a favorite dish courtesy of Betty Crocker. Now, thanks to Betty Goes Vegan, you can easily turn many Betty Crocker-inspired recipes into vegan favorites! 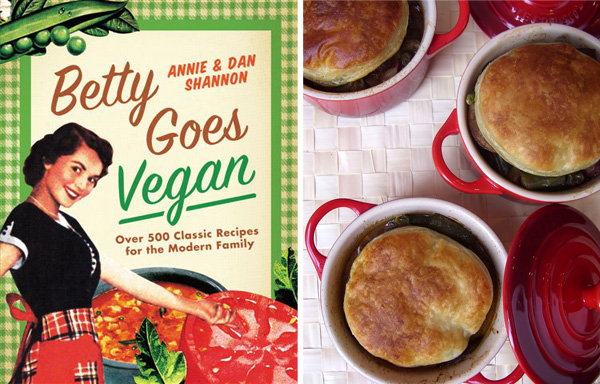 The past catches up with us

Many of us grew up with meals made from Betty Crocker’s iconic recipes. In fact, you can probably recall a favorite salad, casserole or cake that was either standard fare at your house or served for special occasions.

Annie and Dan Shannon decided to take on a cooking challenge: As vegans, they wanted to prove that any recipe could be recreated in a vegan format. Not simply recreated, but made palatable to just about anyone.

What the pair produced is a comprehensive cookbook called Betty Goes Vegan. Their cookbook is filled with 500 all-vegan recipes in every category from breakfast to holiday foods.

What’s fun about this cookbook is that many of the recipes the Shannons created were inspired by the 2010 edition of The Betty Crocker Cookbook (they chose the recent edition to appeal to the modern family). However, Betty Goes Vegan is more than a mere cookbook. The couple doesn’t just tell readers to veganize recipes. They walk readers through the process, explaining how to use vegan products to deliver the best results.

The Shannons cover meatless proteins (like seitan and tempeh), mock meats and vegan cheese in the book’s comprehensive sections. In the “Meat, Poultry and Fish” section, for example, you’ll find many main-dish remedies to the “what will you eat” question often posed to vegans at holiday meals. As they prove, based on these recipes, the answer no longer is “everything but the turkey.”

Each recipe is introduced with a brief overview of the origins of the dish, and occasionally includes a charming tale from “that time when…” You’ll also find lists of products and tools that will make vegan cooking easier (both to understand and to accomplish). Inspired by Betty Crocker, this cookbook is a resource for vegans, those new to veganism and those who might be there one day.

Get your copy of Betty Goes Vegan >>

Annie and Dan Shannon live in Brooklyn, N.Y. Annie has worked at the animal advocacy organization, In Defense of Animals, and as the fashion industry liaison for the Humane Society of the United States. She does most of the cooking. Dan was previously the director of youth outreach & campaigns for PETA and is now a senior strategist for the social movement strategy consulting company, Purpose. He does the dishes.

Nigellissima by Nigella Lawson
From Mama’s Table to Mine by Bobby Deen
Small Changes, Big Results by Ellie Krieger